Village of Patchogue, New York – A community of families

A community of families

Business View Magazine interviews representatives of the Village of Patchogue, New York for our focus on Economic Development in U.S. Communities

Situated along the Great South Bay, opposite Fire Island on Long Island’s South Shore, Patchogue, New York is a small, incorporated village with deep roots in its maritime past. Oystering, shipbuilding, and fishing operations thrived there during the 1800s, and given its proximity to Manhattan about 60 miles to the west, summer tourism, too, was an important piece of the town’s fabric. When the Long Island Railroad extended service to Patchogue in 1869, charming, family-owned seaside resorts began populating the area, attracting throngs of visitors to the 2.2-square-mile hamlet.

Meanwhile, Patchogue was simultaneously coming into its own as an industrial core, welcoming manufacturers, lace and lumber mills, banks, and a hodgepodge of small businesses. “If you look at the history of Patchogue, you’ll see that it’s always been a hub,” says David Kennedy, Executive Director of the Patchogue Chamber of Commerce. “For decades, it was the retail hub of Suffolk County and now it’s the entertainment hub in its current incarnation. Basically, Patchogue has a long-serving tradition of being an important centre for Long Island.”

They’ve been enjoying a season of renewal since the 1990s, with new boutique shops and dozens of trendy restaurants opening alongside the restoration of Patchogue’s glorious local theater. In 1997, the Patchogue Village Board made the decision to acquire the old movie palace formerly known as Ward and Glynne’s. Local businessmen funded the building purchase and the Village used grant monies to renovate and restore the vaudeville relic to its former glory.

“The theatre operated as a movie triplex until 1986, then it was revived as the Patchogue Theatre for the Performing Arts,” Kennedy specifies. “I’ve always felt that you could draw a direct line between Patchogue becoming a restaurant town and that theater’s reopening.” 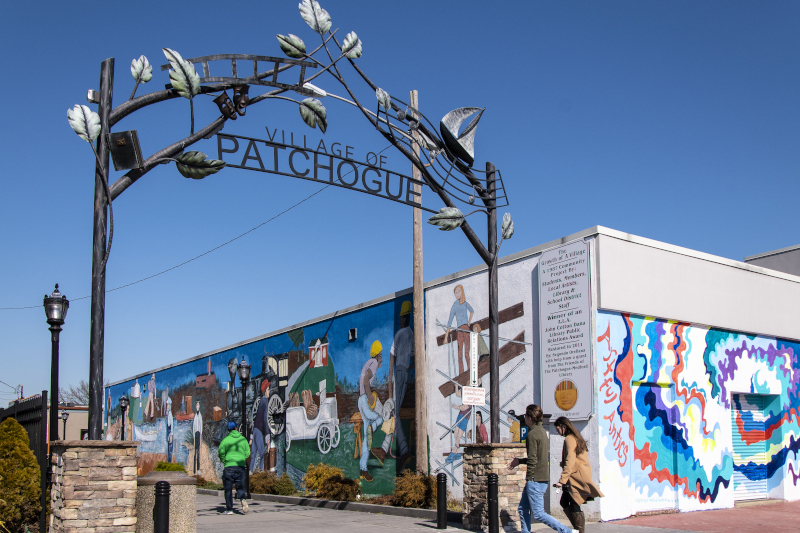 “We only had Chinese food and luncheonettes up until then,” jokes Village Trustee Lori Devlin. Today, the Village is also home to a spirited artists’ community – seamlessly integrated with Patchogue’s downtown and furthering the neighborhood’s progress as a beautiful, livable, all-around interesting place. “In the last 18 years, we’ve had better than $650 million in new construction downtown, of which $50 million came from grants,” says Mayor Paul Pontieri. “We’ve made it into a destination.”

Under creative leadership and with the efforts of a volunteer-driven community of professionals, the downtown re-emerged from its retail slump as a cultural focal point for re-imagining Patchogue as a mixed-use, artist-initiated kind of place. On the pulse of that change was Artspace Projects Inc., that in 2011 unveiled the Artspace Patchogue Lofts – 45 units of affordable artist housing sitting on top of 2,500 square feet of arts-oriented commercial space.

“It’s also given us that sense of adding to the theater,” Pontieri shares. “Now you have Artspace that has galleries, and houses the Patchogue Arts Council and has a small, 70-seat movie theater called the Plaza Cinema. It’s really changed the face of downtown Patchogue from a retail hub like we were in the ‘60s with JCPenney’s, Woolworth’s, W.T. Grant’s, McLellan’s… to a bonafide entertainment and theater district.”

“The Arts Council has also driven a lot of activities that have brought artists to the community,” says Devlin. “That’s really enhanced the whole creative vibe we have now, that we didn’t have before.”

Pontieri claims they’ve approached the revitalisation project in a different way than most municipal governments would have. “We’re building residential in the middle of our downtown,” he says. “We’re also breaching heights. We go up five storeys, whereas Long Island has traditionally maintained a maximum of 45 feet.”

“The Mayor’s been very forward-thinking,” Kennedy chimes in. “One of the biggest issues on Long Island is housing for young individuals and families, and Paul’s been so creative in finding new housing opportunities within the downtown district, which has certainly created a vibrancy there.”

Patchogue’s current population has reached an all-time high of 12,500 residents, a difference of 800 people from just five years ago. “You need a strong municipal board that has political courage to develop on Long Island,” says Mike Kelly of the Kelly Development Group. “Mayor Pontieri and his administration personify those characteristics. When Paul came to office, his goal was to bring development back to Patchogue. He had a great vision and he’s executing on that vision. He’s the prototype of who a municipal leader should be. Paul has always had great team members on his administrations – everybody’s a pleasure to do business with – and he should be commended for that.” 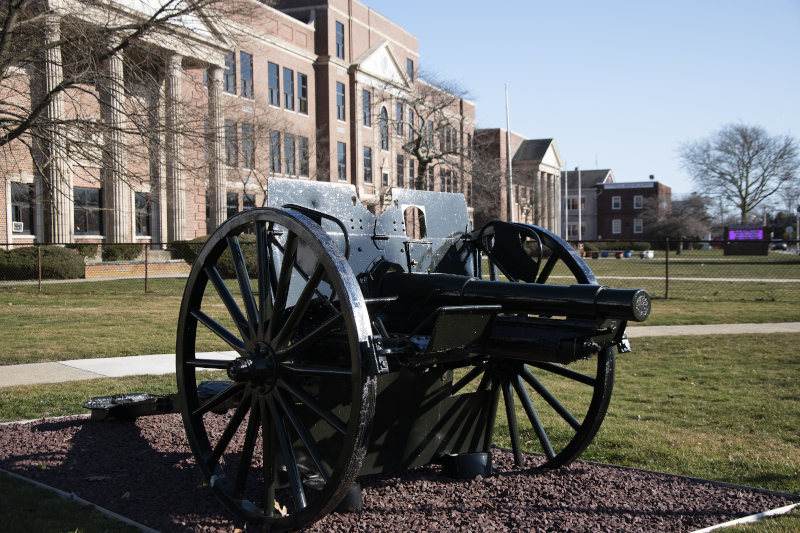 “Long Island has a reputation of NIMBYism – Not In My Back Yard,” Kennedy admits. “That’s always been the issue with losing young people, losing people in general, because the housing opportunities aren’t there. A lot of communities, when new apartment complexes are proposed, they turn them down. Paul did the opposite: he advocated for them. That’s a huge reason why Patchogue stands out now as a Long Island community that’s leading the charge in redevelopment. It’s because our Mayor had the guts to say, ‘We need this!’”

The Village’s population is one of the few on Long Island that’s skewing younger, with an average age of 36. In comparison to the County average of 42. “It really is a community of families,” says Pontieri. “St. Joseph’s College is another of our assets that accounts in part for that demographic. They get involved in about 80% of what we do.” Originally built in the 1950s to house the Seton Hall High School, ‘St. Joe’s’ is a private, liberal arts college nestled on a 28-acre lakeside campus just off Sunset Highway. “They’ve got a big presence in the Village,” echoes Kennedy. “They started up a hospitality program which is helping to train students who could eventually wind up working in our restaurant district. Being a bit of a college town is definitely important; it’s an aspect that adds to the flavor of the downtown.”

The Blue Point Brewery is another local landmark where rich history meets modern service. They’re carrying on as the lone survivor of Long Island’s microbrewery craze of the 1990s. “It’s a Long Island brewery that was founded here in Patchogue that’s since gone national,” Devlin says. “That’s kind of a feather in our cap.” Located inside a 54,000-square-foot building on the site of a former lace mill, Blue Point offers a tasting room and hosts an annual cask festival held every spring.  It’s one of several casual waterfront restaurants that have sprung up on River Avenue since the Village resurrected the theater.

“Not only do we have a waterfront on the Great South Bay, which runs East-West, but we have the Patchogue River, which runs North-South, and was formerly a working river,” Devlin explains. “There’s still some boat building and ferry transportation going on, but at one time it was used for oil storage and was heavily industrial. We’ve mostly been moving away from that and toward more arts and entertainment.”

“Patchogue is unique in that way. It’s such an attraction that you can live and work in this community, and a lot of people do,” Kennedy affirms. “Traditionally, Long Island has developed its residential neighborhoods along the shorelines, and its industrial and business districts in the center. So, a lot of people who live along the shorelines are usually working in the middle of Long Island, whether it be in Hauppauge or Syosset or somewhere in Nassau County. But I’d say the majority of people probably work on Long Island and commute. We’re blessed to have a major hub of the Long Island Railroad here and we do have a healthy group of people that commutes to New York City. That’s another one of Patchogue’s secrets: our accessibility to the train.”

Although ease of access to larger metropolitan areas has been a central theme of Patchogue’s since its early days as a seaside resort town, Pontieri believes that a commitment to leadership has played an even more valuable role in the Village’s social and economic recovery. “We’ve had some very smart managers that have done some things most communities don’t do,” he says. “The Mayor in 1960 got the downtown businesses to purchase and pay for 2,200 parking spaces and turn them over to the Village. What he started was essentially a business use district. A different Mayor in 1996 had the foresight to know that the theater could anchor the downtown – 1100 seats – you bring that many people onto Main Street a couple of nights a week, all these restaurants, it’s made for them.”

Pontieri adds, “When you build these things, you’re building what effect they’re going to have tomorrow. It’s not like paving a road to fill a pothole. It’s about building with a future outlook. And that’s what we’ve looked to do: to build Patchogue for the future.”

What: An ambitious waterfront community; population 12,500

Ready to Lead Our Community Forward.

St. Joseph’s College (SJC) has been a dedicated member of the Patchogue community for more than four decades—and we remain a vital part of its future.

Committed to the health and well-being of the entire SJC community, we are closely following all COVID guidelines to provide a safe and secure environment in which to learn. Despite these challenging times, SJC students receive the personal attention needed to be ready to go further, whatever tomorrow brings.

Founded by the Sisters of St. Joseph in 1916 and consistently named one of U.S. News & World Report’s Best Regional Universities in the North, students choose SJC for its small class sizes and commitment to compassionate service to others. Our 12:1 student-to-faculty ratio means students benefit from engaged faculty who serve as mentors and valued advisers.

With one of the lowest tuition rates of independent colleges and universities in the New York metropolitan area, students earn a high-quality education, and more than 43,000 alumni provide guidance, networking opportunities and tangible jobs. SJC is known for its commitment to excellence in academic and co-curricular programs, and its inclusive community focused on individual development, professional success and service to society.

With three campuses in Brooklyn, Patchogue and Online, SJC offers something for everyone. SJC Brooklyn is at the center of one of the nation’s most vibrant cities. The campus features the Dillon Child Study Center and the Hill Center with a 270-seat, NCAA-regulation basketball and volleyball court, as well as off-campus housing at the St. George/Clark Residence.

SJC Long Island is located on a 32-acre lakeside campus in Patchogue with campus amenities that include the Clare Rose Playhouse, Callahan Library, John A. Danzi Athletic Center and a state-of-the-art 24.8-acre outdoor field complex that is home to several NCAA Division III teams.

H2M is a full-service consulting and design firm offering the expertise of more than 480 architects, engineers (water supply, civil/site, structural, M/E/P, wastewater and environmental), planners, designers, inspectors, surveyors and scientists.  H2M is proud of its history of client service and consistent ability to meet architectural, engineering, and environmental challenges.