An epicenter of events

U.S. Bank Stadium in Minneapolis, Minnesota opened in 2016 on the former site of the Hubert H. Humphrey Metrodome, which had been the home of the NFL’s Minnesota Vikings from 1982 to 2013, the MLB’s Minnesota Twins from 1982 to 2009, and the Minnesota Timberwolves in their 1989–90 inaugural season. The new, $1-plus billion facility, owned by the State of Minnesota, and operated by SMG, the worldwide venue management group, has a lightweight translucent roof made up of 60 percent Ethylene tetrafluoroethylene (ETFE), a fluorine-based clear plastic, and is the largest in North America, spanning 240,000 square feet. Its slanted design, inspired by Nordic vernacular architecture, allows the stadium to endure the region’s heavy snow loads, while providing fans a view of downtown Minneapolis. The stadium is the biggest public/private partnership project ever undertaken in the North Star State – $348 million for its construction came from the state of Minnesota, $150 million from the city of Minneapolis, and $551 million from the Minnesota Vikings, the stadium’s main tenant, and other private contributions.

In addition to hosting the Vikings’ home games, the U.S. Bank Stadium presents in excess of 400 events every year. “The state built a very multi-purpose building,” says General Manager, Patrick Talty. “It allows us to do a lot of different things. The Summer X Games were here; we built skate parks for skating, BMX biking, Motocross. We’ve done several concerts; we had two sold-out Garth Brooks shows in May; we’ve done Luke Bryan, Metallica, Taylor Swift, Kenny Chesney, Coldplay, JZ and Beyonce, Guns N’ Roses – they’ve all come to the stadium and been very successful. We hosted Super Bowl LII back in February 2018, and we were the home of the 2019 Men’s Final Four Basketball Championships, recently. We’re also hosting the Men’s NCAA Division I Wrestling Championships, next March.” 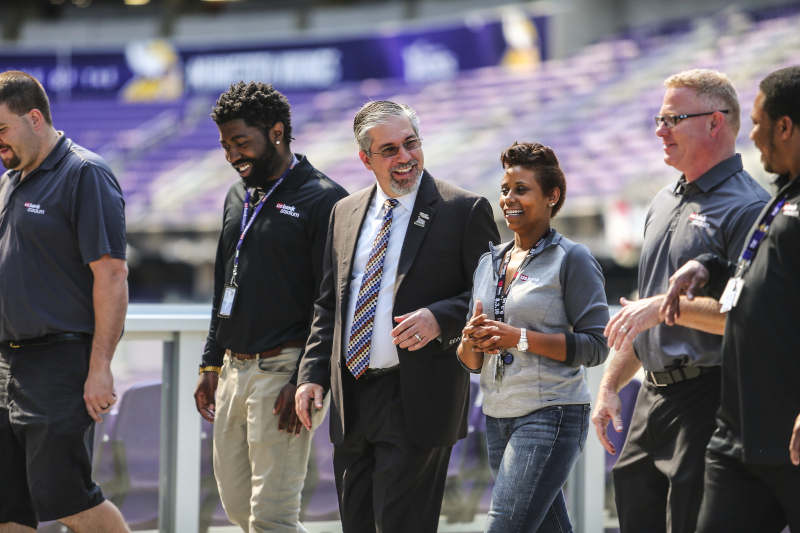 Patrick Talty, General Manager with other members of the team.

“A lot of people think that stadiums do 10 to 20 events a year and that’s it. We’ve demonstrated that we’re an extremely busy building – more like a convention center. That is an area that we’ve worked hard at,” Talty continues. “We do a ton of rental events – business meetings, bar mitzvahs, weddings, galas, and all kinds of dinners. We have six beautiful clubs in the building – all separated – so we can host individual events in each of those during the week and in the evenings on weekends. We’ve had a Home Show, a Holiday Boutique Buying Show, a Custom Car Show; we do an RV Sale on the floor. We just had the Lutheran Church Missouri Synod gathering here, this summer; we booked the ELCA, the Lutheran Church, again, for their youth gathering in 2023. We’ve hosted a Ramadan event for the Muslims; a youth gathering for a non-denominational Christian event. The U.S. Bank Stadium is busy constantly; that’s one of the things we’re real proud of.”

“The other unique thing about this stadium is, it actually hosts baseball,” he adds. “Part of the bleachers push back and you can create an outfield to make a baseball field. The University of Minnesota plays their early season games here, and then we open to a lot of the other small regional colleges for them to play baseball. It’s still pretty cold in February and early March, so this is a benefit teams will heavily utilize across the upper Midwest. We start at 6 AM and go to 3 AM every single day for about three and half weeks.”

As the newest kid on the block, the U.S. Bank Stadium also boasts the latest in technological amenities. “Being a new building, we have the benefit of having a complete end-to-end system,” Talty explains. “We’re a hundred-percent Cisco building from the head all the way to the individual Wi-Fi access points. We have both a Wi-Fi and a DAS system for all our users. One of the things we’ve heard a lot of feedback on is that the stadium is able to accommodate the mega-events and not have any technology issues. The Final Four said it was their best technology experience ever; they broke download and data transfer records for a single day event on the final night of the championship. We have over 2,000 televisions in the building – we can program them individually, or we can take over all the televisions and send content to each of them. We have a lot of digital screens for the fans. And then there are the things you don’t see, behind the scenes, such as the POS system. It’s a company called Appetize Technologies that uses IPads for their POS system – very user friendly, very easy training-wise, very robust. We even use a ticket scanning system that started in the ski industry.

“Another unique thing about this building, that I never experienced elsewhere, is that it’s a single technology infrastructure. The backbone that was put in by Cisco runs all of the building functions. All the building controls here, including HVAC, security, access controls and light safety system, ride on the same network that runs through the whole building. So, it really is an end-to-end solution that we can manage.” 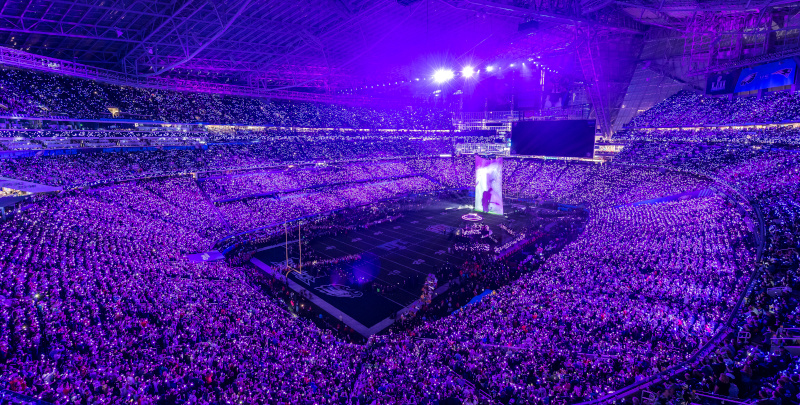 Another area in which the stadium excels is sustainability. “Minnesota is a very environmentally-friendly state, overall, and it’s important to us as the building operator,” Talty asserts. “In 2017, we became LEED Gold certified for Building Design and Construction (BD+C) and we’ve just received Platinum LEED Certification on Operations and Maintenance (O+M). We are the first professional sports stadium to achieve the Platinum Certification for O+M, which says a lot about the dedication our staff has towards our sustainable efforts.

“We achieved a zero-waste Super Bowl – our diversion rate was 91 percent. That’s two seasons after opening, ramping up a program that is diverting a lot of waste from the landfill.  All of our food and beverage containers, everything that comes out of the kitchen is put into vessels that are compostable. We educate our fans at events to make sure they are throwing them away correctly. We do a post-sort – every trash bag that comes down, we go through it to make sure we’re getting as much diversion as we can. We donate a lot of our food waste to local area pantries.

“We’ve put a lot into energy savings because, obviously, utilities are a big cost. So we spend a lot of time shutting off things we don’t need. We’re putting in smart plugs for freezers and coolers, so if we have a long break between events, we can shut those off easily and monitor their power use. We use green cleaning products and have since day one. It doesn’t mean we’re perfect and that we don’t see areas where we can grow and change, but we’re continuing to really work hard at keeping our sustainability efforts going. We’re real proud of what we’ve done and how hard we’ve worked at it. And I think that Platinum Certification speaks to that.”

Talty is also proud of how hard he and the stadium’s 86 full-time, and up to 3,000 part-time employees work at customer service and the fan experience. “Being a new building, sometimes that culture takes a long time to build, but we built it quickly and we were very intentional from the start,” he states. “We’ve been rated in the top five in the NFL for fan experience, each of our three years. We have a very robust, SKOL Service program that our staff is trained on. We also have our staff trained in alcohol management and how to be proper stewards in emergencies. We spend a lot of time with our part-time staff, the 3,000 people who come to this building to make it operate for a game. It’s not easy to get all that staff pulling in the right direction. We spend a lot of time on that and we’re real proud of the feedback we get from our customers.”

All of those efforts have not gone unnoticed. U.S. Bank Stadium has been the recipient of a bevy of honors for design, service, and sustainability since the day it first opened for business. Here is a list of some of its awards:

“The U.S. Bank Stadium is an iconic building and it is truly operated at the highest level,” Talty says in conclusion. “And it’s been a great asset to the State of Minnesota. The money invested into this facility has been well worth it.”

WHAT: Home of the Minnesota Vikings of the NFL