Rocket Mortgage FieldHouse – Extraordinary Experiences. All The Time. For Everyone.

Extraordinary Experiences. All The Time. For Everyone.

Welcome to Rocket Mortgage FieldHouse, Northeast Ohio’s premier sports and entertainment destination located in the heart of downtown Cleveland, Ohio. Home to the NBA Cleveland Cavaliers, the AHL Cleveland Monsters and host to the best entertainment in the region, Rocket Mortgage FieldHouse welcomes over two million guests annually to 200+ events, including world-class concerts and family shows. In addition, the downtown Cleveland sports and entertainment facility has been named the host venue of the 2022 NBA All-Star game weekend, when the NBA will be celebrating its 75th anniversary, and will host the Women’s Final Four in 2024.

In Sept. 2019, a grand opening event was held to showcase the amazing Rocket Mortgage FieldHouse $185M renovation project – a private/public partnership, with the Cavaliers privately funding $115M of the cost. The remaining public portion of funding comes through almost entirely self-generating sources from the FieldHouse – the largest portion being that of an existing 8% admissions tax on all tickets to the venue.  The most notable additions are the new north facing atrium that adds 43,000 sq. ft. of public space and the “Power Portal” audio-visual 360 degree tunnel that creates the fan entryway made up of 1,000 sq. ft. of LED panels accompanied by a dynamic audio system. With the creation of “neighborhood” gathering destinations that feature premium concessions offerings that include celebrity chefs Michael Symon, Rocco Whalen and Karen Small, Rocket Mortgage FieldHouse is forever finding new ways to provide the best fan experience in sports and entertainment! 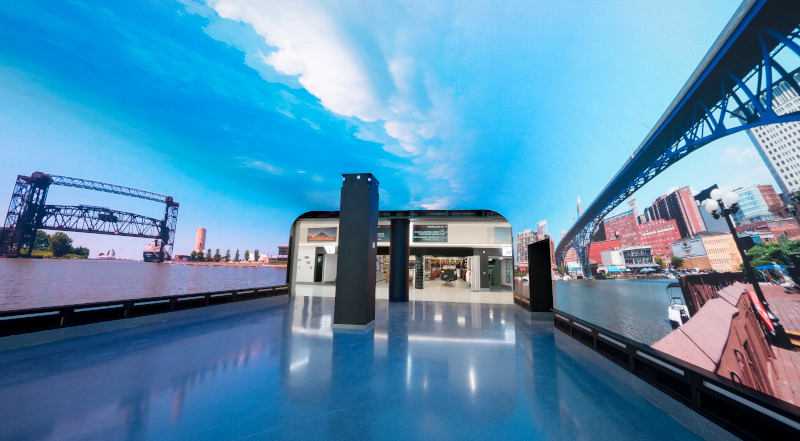 To get up to speed on all the details of the fantastic arena transformation, Business View Magazine spoke with Len Komoroski, CEO of the Cleveland Cavaliers and Rocket Mortgage FieldHouse. The following is an edited transcript of the conversation.

BVM: What is the history of the Rocket Mortgage FieldHouse?

Komoroski: “This building opened up in 1994 as part of the Gateway complex. There was a package known as the sin tax back in the early 1990s which then became a key financing component for the new arena that was anchored by the Cavaliers, called Gund Arena at that point, and also what was then Jacobs Field for the Indians. Prior to that, the Cavaliers were playing in Richfield Coliseum in Summit County (a different county and different city). And the Indians were part of Municipal Stadium playing with the Browns who actually managed that facility.

“So, it was really viewed as a model of urban planning and utilizing these public facilities of note to be a catalyst for urban development and redevelopment. For frame of reference, prior to when these two buildings opened, the Gateway District was a series of parking lots in the southern end of downtown Cleveland. There were four eateries open for lunch, no residential, no commercial, and no hotels. Since then we’ve had more than $2 billion of development including the largest residential district of Cleveland; nine hotels including the largest concentration of historic hotels in the country; over 80 restaurants; and a significant amount of commercial activity, with substantial more development on the horizon.

“The building itself, from the historical end, is in its 26th year. Contextually, the average lifespan of an arena in the NBA is 22 years and the lifespan of Richfield Coliseum, which was our predecessor facility was 20 years. So this was really about a building with great bones that was most recently Quicken Loans Arena and now is Rocket Mortgage FieldHouse – the transformation coming with a name change as well. Taking this building that had great sightlines but structural flaws that were ultimately able to be remedied for a fraction of the investment, as opposed to building a brand new arena.”

BVM: Who owns and manages the FieldHouse?

Komoroski: “The public body that the title of the building falls under is Gateway Development Corporation which is a 501(c)3 jointly between the City of Cleveland and Cuyahoga County. If Gateway were not to exist, the title of the arena would fall to the county and the title for Progressive Field would fall to the city. But it’s a public-owned facility; we manage it, we largely maintain the upkeep, and all the activities associated with it. We have 485 full-time team members as part of our overall entity and over 2000 part-time members.

“As it relates to mid to small markets, in our league the equivalent of that would be the NHL, we have the most public-friendly leases. We basically pay for all the repair and maintenance, all the operations, major capital repairs up to $500,000 and, in conjunction with the Indians, also pay our landlord’s costs. Gateway have staff, property taxes, common area space they maintain, and between us and the Indians, we’ll split those obligations 50-50. That is unique on a national basis because we actually fund our landlord’s expenses, which are significant – about $4 million a year.”

BVM: Were you open during renovation?

Komoroski: “We shut down for two consecutive summers, in 2018 and 2019, and had two phases of internal work done. It was a 20-month project. We continued with external work while the building was operating during the primary sports and entertainment season from fall to the spring, which included completing both the Cavaliers and Monsters regular seasons.  We believe the now finished project sets a new benchmark for renovations of facilities of this nature. The facility had ingress and egress issues. We had among the least amount of square footage for comparable arenas in our league and we now have among the most. We had issues with cramped and tight concourses. We had no gathering spaces and wayfinding issues. There was a myriad of operational and structural concerns and we were disconnected to our city, right in the heart of downtown. The only way you knew there was an event going on was if you saw people going in or out of the building because the only glass was for office space. And we had a façade that was less than inspirational. 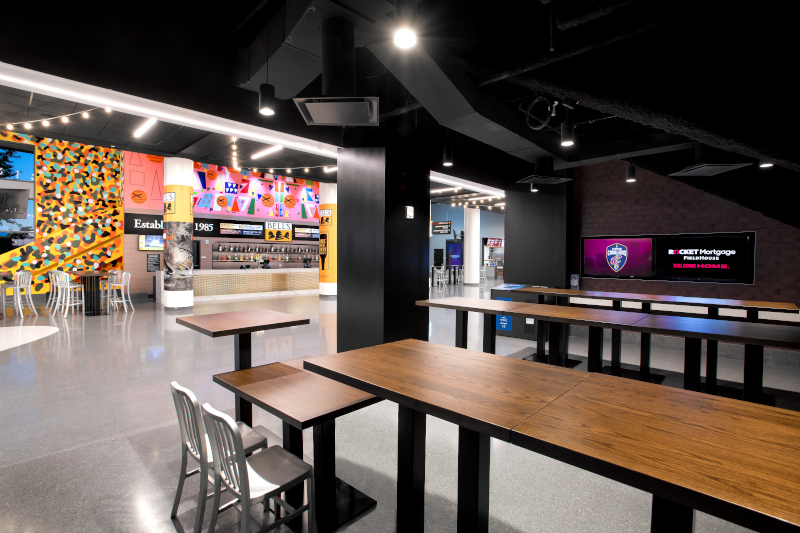 “So we solved those structural issues and actually turned them into a strength. Now we’ve added a phenomenal 40,000 square foot atrium to the front of our building. It boasts a stunning glass wall to the height of the building that extends and wraps around the entirety of the front facing downtown Cleveland. A brushed aluminum curtain wall behind that glass wall creates an architectural treatment with baffles that hide the mechanicals but open up more when there’s space where people are behind it. It also provides a platform for us to have LED lighting that enables us to project up to 1500 color combinations along with motion; to change the personality of the FieldHouse based on whatever event is going on.”

BVM: What other features and amenities were included?

Komoroski: “We added eight neighborhoods throughout the building – destinations where people can now gather and enjoy their time with coworkers, family, friends – anchored by food and beverage like you would have in a typical neighborhood. We totally changed the wayfinding system to make it intuitive. We’ve added another 7500 square feet on the south side of the building to make that entrance more hospitable in terms of processing people from an operational flow and added another neighborhood as part of that.

“Within the concourse, all the public spaces and concession stands were totally redone in a more modern, fan-friendly way with a dramatic emphasis on technology experiences, along with expanding our already robust portfolio of local restaurateurs that are beloved by our fans here in northeast Ohio. All the restrooms were changed as well. All the static signage was changed with digital displays. Over 740 televisions added throughout the concourse. There are two truly unique signatures of the FieldHouse: one is the LED lighting treatment for the brushed aluminum curtain wall that covers the front and the primary entrances, and the second is what we call a “Power Portal”. As you make your way through into the inner concourse from the grand atrium you are surrounded by LED imagery – that can be the skyline of the city, Cavaliers related, Disney on Ice, you name it. But it creates a whole experience for fans. It also has surround sound audio.”

BVM: How was the project funded?

Komoroski: “We extended our lease to 2034 and with that deal we crafted an agreement to fund the project where $70 million was public and $70 million private money and we were responsible for any cost overruns. We have an eight percent admissions tax in the city of Cleveland and there is a cooperative agreement between the city and the county and roughly half of that tax generated by the FieldHouse is going towards the transformation. There was also a portion of the bed tax – the FieldHouse is the largest generator of heads and beds in downtown Cleveland – a small portion of that is going to fund the public portion. We’ve also had $45 million of additional investment in the FieldHouse from our Chairman, Dan Gilbert, as opportunities came up to make the transformation even more dramatic. Including being on the cutting edge from a technology standpoint.”

BVM: What is most important for people to know about the Rocket Mortgage FieldHouse?

Komoroski: “We believe the Rocket Mortgage FieldHouse sets a new standard as a holistic renovation for a major professional facility of this nature. The before and after of the interior and exterior is a total departure from what existed here previously. And the dramatic change of the fan experience, going from one that our fans tolerated to one that now rivals any arena in the world and speaks to the level of excitement and anticipation in the sports and entertainment space. We are the anchor of the sports/entertainment district in Cleveland. Rocket Mortgage FieldHouse is THE place to enjoy a night out with your family and friends, where good times happen and memories are always made!”

What: World-class sports and entertainment facility