The City of Ogdensburg, New York dates to 1749 when a mission was built on the banks of the St. Lawrence River by Father Picquet. He built Fort La Presentation upon the site of an old Indian village named Swa-gatch which was the northernmost village along the original Indian trail that ran from the Mohawk Valley to the St. Lawrence River.

Ogdensburg developed into an important port of entry and railroad center during the 19th and early 20th centuries, with an extensive trade in lumber and grains as well as paper production, boat building, merchant and custom milling, foundry, and machine work. The city has been a seaport since the early 19th century. The completion of the St. Lawrence Seaway in 1959 connected the Great Lakes to the Atlantic Ocean and opened the area to unprecedented industrial expansion. Ogdensburg is the only American port on the St. Lawrence Seaway. This proximity to Canada means everything for the Ogdensburg International Airport. 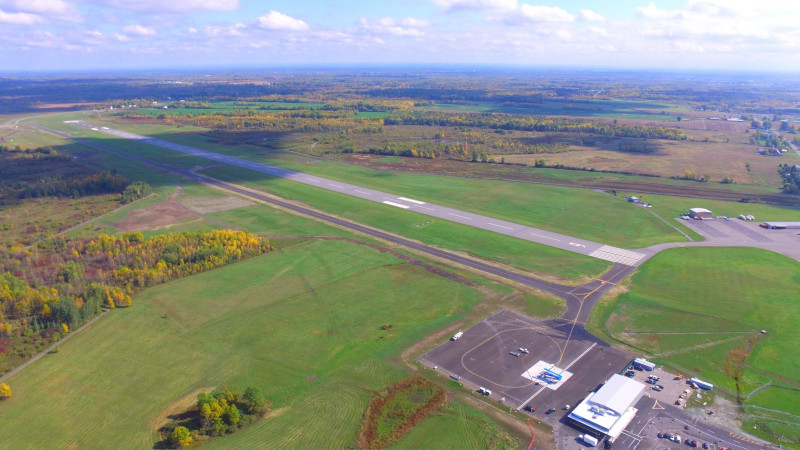 The publicly owned airport is located about two miles southeast of the city and is owned by the Ogdensburg Bridge & Port Authority, that also owns and operates the Ogdensburg-Prescott International Bridge, Port of Ogdensburg Marine Terminal Facility, Commerce Park, Port of Waddington, a medium-heavy industrial park, and two short line railroads. The airport is mixed-use, about half and half commercial and general aviation. Contour Airlines provides daily commercial service to Philadelphia.

In terms of resources, Ogdensburg International covers 500 acres and has one asphalt runway 9-27, which is 6400 by 150 feet. The property has a renovated terminal building, and several smaller buildings including T-hangars, a storage shed, and a fire hall. All of this is managed by a staff of five people. Operating as its own FBO, the airport also handles transient flights, fuel sales, and all the amenities general aviation pilots have come to expect.

“I think the main reason people fly into this area is easy access to and from Canada,” explains Stephanie L. Saracco, Ogdensburg International Airport Manager. “We are very close to a border crossing. There is also nature and wildlife – the scenic beauty of the Saint Lawrence Seaway and the Thousand Islands, just north of the Adirondack Mountains is incredible. We also have four universities within about 35 miles and so student travel is part of our reality.”

“The other side of it is the ease of service,” offers Anthony Adamczyk, Director of Development for the Ogdensburg Bridge & Port Authority (OBPA). “If you wanted to know how to think of our organization, the closest thing to compare it to would be a very small version of the Port Authority in New York and New Jersey. We are a public authority and the airport is one of our divisions, along with the bridge, port, railways, and industrial parks. We have a rail line leading from the port that connects with CSX – so, you have all these different modes of commercial transportation that we have essentially covered in one organization. This makes it extremely easy for any business customer to work with us. One team to contact, no worries. And if you want to relocate your business to Ogdensburg, we have all the infrastructure in place!”

Being a small airport is actually beneficial when it comes to convenience. The terminal building was redone in 2016 and is easily accessible, charming and user-friendly. Still, the hope is to continue to expand and make it even better. Ogdensburg International has truly created a ‘less is more’ atmosphere where there are no long lines, no hassle finding parking spaces, and no crowds to navigate – just the beginning of your adventure.

“We are always having to do infrastructure projects,” says Saracco. “Right now we have a big drainage project going on. It doesn’t mean much to the traveling public, but behind the scenes, it is very important. We do not have a problem with the pavement itself, but this project will ensure that stormwater drains better in the surrounding areas. We recently finished a runway lighting rehabilitation, as well as some work to our navigation equipment, then the drainage, and after that, we are planning on building a snow removal equipment building. Being in upstate New York there is always competition, but we manage these infrastructure projects through grants from the state and the FAA. Once we have secured the funding, we are going to be looking at further terminal upgrades to create more space which will help with baggage, passenger flow, and waiting areas, as well as security. We also want to create some meeting space that can be used for community groups and open space for community events.”

One of the key players at the airport is MAPCO Auto Parks. They handle all the parking services at the airport, but it goes far beyond that because the airport only has a staff of five. Being open from first thing in the morning through to 8:30 at night seven days a week for 365 days can be a burden. Saracco acknowledges, “The folks at MAPCO Auto Parks are very helpful and not only with parking. They help around the terminal itself, getting folks in and out of the parking lot, as well as other types of ground transportation, assisting with taxis, and arranging transportation – they’re good at it.”

One of the big draws for Ogdensburg International Airport is the proximity to the Canada/U.S. border. According to Saracco, “Being less than five miles from the airport, you clear customs there and then come right to the airport and fly out anywhere in the United States without having to clear customs again. The nearest city to us in Canada is Ottawa, the capital, and they are straight up the highway from our border crossing, so that is a big draw. It is easier the other way too, some folks fly in here in their private aircraft and then rent a car to cross into Canada – it is often easier than clearing customs in a larger airport. This also holds for commercial traffic with small amounts of cargo. I have been told by certain businesses that it’s easier to fly into this airport and truck the goods from here across the bridge.”

Although they do not have much cargo traffic at present, the airport has begun to explore the possibilities and would love to open it up to more shipping, which given the location seems like the perfect pairing.

Looking to the future Saracco would love to see more commercial air traffic and an expansion of the FBO services offered. “We do have a lot of business travelers,” she says, “and we would like to make their experience a better one, their time in the airport more comfortable. We are also aware that airports don’t exist on one stream of revenue alone, so any type of expansion into other markets or additional services would be welcome. And it would be great to get cargo services operating out of Ogdensburg.”

“I would echo those sentiments as well,” concludes Adamczyk, “and I would add that it would be great to expand our commercial presence. We currently have one airline with one destination, but our goal is to expand with our current carrier and potentially bring on more carriers. The opportunity to expand our offerings and to provide more to the customers is truly exciting.”

What: A convenient commercial/general aviation airport owned and operated by the Ogdensburg Bridge & Port Authority

Where: City of Ogdensburg, New York

Established in 1936, MAPCO Auto Parks is a third generation, family-owned business with decades of experience working alongside clients to assist them in planning parking programs that provide solutions to their unique needs.

Our mission is to maximize the financial return for clients and provide operational efficiencies through customization of hardware and software solutions.

The elements of our success can be found in the innovations and practices that we have developed over the years.

We’ve been at the forefront of launching new operations such as airport valet parking during an era when curbside security and safety required collaboration with local and federal law enforcement.

We’ve proactively navigated challenges and found opportunities with the introduction of transportation network competitors and the unprecedented COVID pandemic impact.

We remain nimble, actively listening to the voice of the customer, constantly evolving parking revenue systems, using the latest IT infrastructure, exploring concepts such as demand-based parking pricing – all while delivering a quality experience for our clients and their customers.

Parking With a Purpose – Experience the Difference™!