Business View Magazine interviews representatives from Medico Healthcare Linen Service, as part of our focus on best practices of laundry and linen suppliers.

Medico Healthcare Linen Service, based in Los Angeles, California, is a leading provider of linen and garment laundry services to healthcare and wellness professionals in the Southern California region, including hospitals, clinics, dental offices, surgical centers, rehabilitation centers, examination facilities, laboratories, hospices, wellness spas, veterinarians, and according to the Director of Operations of this fourth-generation, family-owned company, Greg Shames, “anyone who needs hygienically-clean linen is a target of ours. We provide all of the linens they may need to keep their business running smoothly,” with items that include linens, patient gowns, sheets, scrubs, towels, lab coats, floor mats, and uniforms.

“My great-grandfather, Sam Snookal, started the business in 1932, the same day, my grandmother, his daughter, was born,” Greg continues. “He started doing linen rentals for creameries in downtown Los Angeles. As time went on, he picked up other business – renting towels to doctors, or coats to chefs. Fast forward to 1970. My grandfather recognized that doctors demanded a different level of service than our food and beverage and hospitality customers, and that’s when we split the business in two and started treating healthcare as a stand-alone business.” 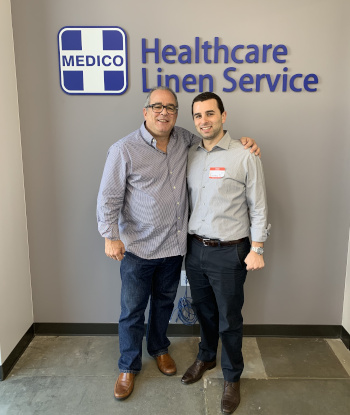 Today, Medico Healthcare Linen Service is a division of the American Textile Maintenance Company, which also includes Republic Master Chefs, its F&B and hospitality division. It is also part of the MEDtegrity Medical Laundry Network, an alliance of independent linen supply companies that provide apparel and textile services to healthcare facilities across the U.S. The company has approximately 850 employees, 160 drivers, five processing facilities, and three depots where its route reps can pick up deliverable laundry. Its coverage area extends from the Mexico border to San Diego, then all the way north to Santa Barbara, and as far inland as Cochella, California.

Medico Healthcare Linen Service is HLAC (Healthcare Laundry Accreditation Council)-accredited, having met the criteria on safety, hygiene, and effectiveness in handling reusable medical textiles; possesses a Hygienically Clean Certification which guarantees that the textiles processed in its facility do not contain harmful amounts of disease-carrying pathogens; is Clean Green-certified by TRSA, which guarantees that its operations are carried out using best management practices regarding environmental sustainability; and is part of the Laundry Environmental Stewardship Program, a voluntary program that facilities undertake to reduce their carbon footprint by making massive adjustments to operations without jeopardizing quality and hygiene.

About three years ago, Medico Healthcare decided to build a brand new, $18-million facility to service its largest healthcare customers. Today, the new plant processes about one million pounds a week for the company’s acute-care clients. “A year and a half ago, it opened in South Gate, California,” Greg recounts. “It’s a 75,000-sq.-ft. laundry that’s only doing hospital work. It has a higher level of hygienically cleanliness and it’s very automated, so we’re able to cut out a lot of the labor touches, which means we’re able to compete on business and get aggressive on pricing because we can produce more efficiently than the competition. In addition, we tell our customers, ‘Here’s the owner’s cell phone number; if you’re not being taken care of, you can call and get an answer right away,’ whereas, our other competitors can’t really make that claim. I would say those are our differentiators.”

In addition to the competitive advantages derived from its new state-of-the-art facility, as well as its personalized customer service, Greg’s father, Brad Shames, President of the American Textile Maintenance Company, believes that being the largest family-owned, healthcare-focused laundry in Southern California, is also a plus, as almost all of its local competitors are either owned by private-equity or institutionally-backed companies, or if family-owned, not family-operated.

“The fact that we are a family-involved business actively involved in it differentiates us,” he maintains. “I think that message is getting to the area that there is a difference when there is ownership that wants to succeed on a day-to-day basis, instead of being absentee, or being run from New York or Wall Street with a facility in Los Angeles. It’s pretty powerful when you talk to customers and tell them that Greg’s great-grandfather started in 1932, and I’ve been actively involved for over 40 years and that I’m still pretty energetic in it, and my son is pretty knowledgeable and energetic in it, and we make a presentation that we’re here to perform, to succeed, and to continue, instead of just existing.”

While Greg admits that the potential market for its services is not infinite, there are still some niche areas that he would like to pursue. “The biggest opportunity for us, today, is in the long-term assisted care market or the skilled nursing facilities,” he explains. “When an older patient goes to the hospital, since hospital stays are so expensive, they transfer them to a rehab facility. Historically, their laundry has been done by the housekeeping staff onsite. That field doesn’t really use services, although as time goes on, and labor gets more expensive and harder to get, they’re finding it more difficult to get housekeepers or EVS (Environmental Services) employees to do laundry. So, we’re seeing them outsource it more.” 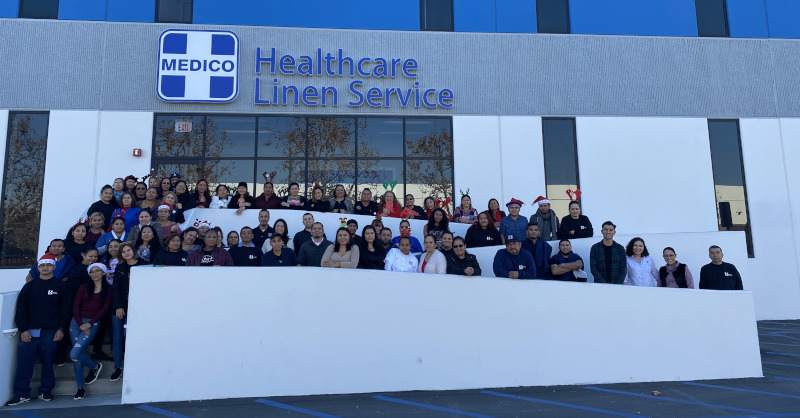 Brad agrees. “The market is finite to a certain point,” he states, “but with Baby Boomers coming to the end of their lives, long-term care is exploding; homecare is exploding. So, five years from now, we hope that we would almost double our business that we have today. That might mean one or two more facilities in that time period to double capacity.” Brad also sees another potential market for the company. “Our biggest competitor is actually the disposable,” he notes.”People still use a lot of disposables in hospitals, in the home, and in medical office building clinics and surgical centers. They spend more on disposables than they do on reusables. So, that’s a challenge but, hopefully, as time goes on, and as demands to reduce carbon footprints continue, reusables become more of an option.”

Speaking of the long-term, Greg adds, “I see us as a long-term player in this field, and our competitors are owned a lot by private equity funds that are short-term investors who may want to ‘spin it.’ Will our competitors still be around in ten years? Probably. But they’ll have a different ownership group. We’re a long-term player in the southern California market, and we’re not going anywhere, anytime soon. We’re investing into the future, and for the next generation.”

Which begs the question: Will there be yet another generation running Medico Healthcare Linen Services, some day? “The fifth generation is only four years old,” says Brad, “so we’re a ways away from there. Hopefully, they’ll be a reason for them to want to come into the business when they get to that point in time, but that’s many years off.” In the meantime, Greg sums up the company’s plan of attack, going forward: “To keep growing and to keep our customers happy.”

WHAT: A provider of laundry services to the healthcare sector

WHERE: Headquarters in Los Angeles, California