Business View Magazine interviews representatives of Harrisonburg, Virginia for our focus on Growth and Sustainability in American Cities.

Harrisonburg, the county seat of Rockingham County, is an independent city with pride of place in the beautiful central Shenandoah Valley region of Virginia, only two hours from Richmond, Virginia and Washington, D.C. along Interstate 81. Very much a college community with two universities in the City limits (James Madison University and Eastern Mennonite University), Harrisonburg provides a vibrant atmosphere for the young and young at heart. James Madison University (JMU) has a strong presence that has buoyed not only the academic atmosphere but is a major factor in redevelopment and business attraction.

The city has initiated some unique programs that are getting it noticed throughout the state. Harrisonburg’s Director of Economic Development, Brian Shull, reports, “We partner with our businesses wherever possible, because their success is our success. So this year we tried a new program specifically geared to help city retailers by offering them technical assistance. It was called Bricks & Clicks. Bricks: to help them with their storefront marketing and Clicks: to help improve their online presence and, ultimately, their sales through their website. We brought in well-known retail experts to help those businesses and offered technical assistance on a customized basis to help them get their game plan together. That was followed up with small cash grants, so they could implement these new strategies. It worked very well for us. We’re carrying it into a second phase now and we received state-wide recognition – an award from the Virginia Economic Developers Association for that program.” 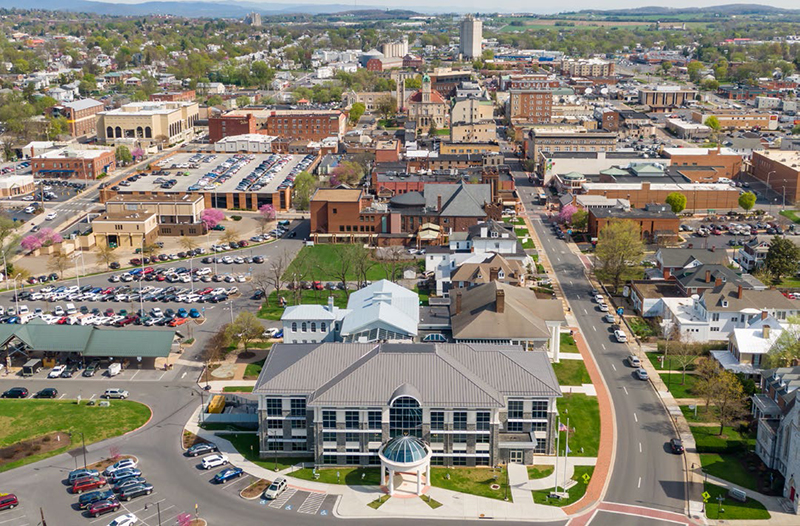 The City of Harrisonburg has a population close to 55,000. The Harrisonburg metro, including the city and Rockingham County, brings that population up to 135,000 daily. From 2010 to 2020, it was one of the fastest growing metros in the state. James Madison University is the largest employer; the second largest is Sentara Rockingham Memorial Hospital (RMH) that serves a regional audience. In addition, there are a number of food processing manufacturers in the city, as well as book printing operations.

The city proactively attracts technology development and has set up technology zones to help make that happen, offering specific incentives to steer tech companies to certain areas, one being the downtown core, and another is a technology park that the city developed. The result is a nice cluster of small technology firms in the downtown, including Rosetta Stone. Renowned for its language learning software, Rosetta Stone was founded in Harrisonburg and is now the largest tech employer downtown.

Adam Fletcher, Director of Community Development, explains, “I’ve been with the city since 2004 and our downtown looks dramatically different now. The Harrisonburg Downtown Renaissance program started in 2002 and since then we’ve seen several old warehouse facilities turned into mixed-use operations. The ‘Ice House’ right behind City Hall was a Cassco Ice manufacturing facility for a number of years and that has been converted into a brewery and multi-family residential units, restaurants, and a jewelry museum. Two former feed warehouse facilities have been converted to other uses. One at the north end of the city, known as City Exchange, was transformed into multi-family units and a high-end restaurant – The Local Chop & Grill House.”

A second downtown feed manufacturing warehousing facility was converted into a restaurant and other retail uses, and plans are in the works for another industrial facility to be converted into residential units. Some downtown buildings in poor repair were demolished and those properties now have four and five story multi-family residential uses. One, known as Urban Exchange, has a brewery on the first floor and close to 200 multi-family units above. Another innovative project called The Colonnade features non-residential on the main floor and multi-family above. Four other breweries have located downtown, including Brothers Craft Brewing, which is housed in an old Coca-Cola bottling facility that’s also a mixed-commercial operation. Tradeshowdirect does printing and creation of point-of-purchase displays in that facility as well, and professional office space will be built-out soon.

According to Fletcher, “From a planning perspective, our downtown central business district is, arguably, the most sought-after property you could have in the city. It’s a zoning category that allows for non-residential and residential, there are no setback requirements, and no parking requirements. And we’re looking to expand that type of zoning up and down our major corridors – connecting to the campus of James Madison University because JMU stretches east/west across the city. Their very historical, well-known bluestone part of the campus stretches along South Main Street and there is a tunnel under Main Street that connects to the Forbes Performing Arts facility. The university also stretches across the interstate where they just completed a new basketball arena with an 8,500-person capacity, called the Atlantic Union Bank Center. That state-of-the-art facility will also be promoted as a large venue to bring high-end concerts to the city.”

JMU’s Bridgeforth Stadium, with its 25,000-seat capacity, is considered one of the top FCS football venues in the nation. When Harrisonburg built a new high school in 2004, the university purchased the old school and converted it into academic buildings. In addition, they built a new baseball/softball complex on that campus. Fletcher also noted that when Sentara RMH developed a new campus, JMU bought the old hospital and converted it into a student success center with multiple student-oriented uses.

Shull adds, “As a college community, we’re very dependent on the students and their spending habits. They make up nearly half of our City’s population. Our businesses really felt the impact when the students returned home in March thanks to COVID-19. Our business community has certainly been tested through this pandemic, but we are a resilient group and we will band together and help each other survive and once again thrive.”

The city is currently in the midst of two significant projects. One is the Comprehensive Housing Assessment and Market Study, assessing housing in the city across all demographics and geographies to better understand the market, the needs, and the barriers to affordable housing. “The second involves a rewrite of our zoning and subdivision regulations,” says Fletcher. “That’s significant too because zoning sets the stage for development and how you progress forward to meet your plans. We have a very engaged population in Harrisonburg and I think it will be a great opportunity for us to modernize our development practices and promote mixed-use and walkable neighborhoods.” 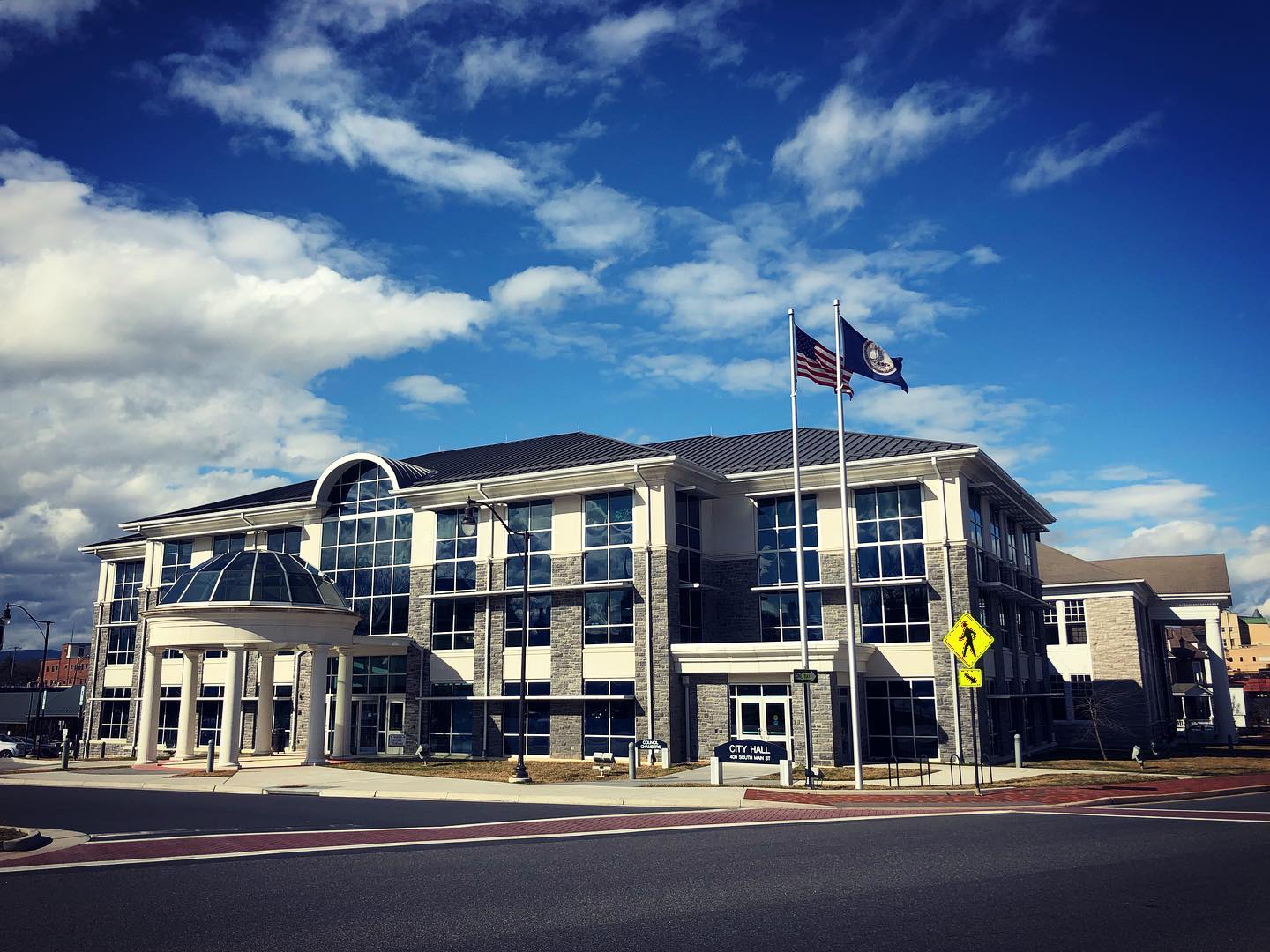 Rebecca Stimson, Environmental Compliance Manager, shares “We are excited about our Environmental Action Plan. It’s a sustainability plan for the city revolving around many sectors, from energy to transportation to food use. We have listed goals and now we’re working on how to meet them, how we will measure these environmental actions, and what we can do to implement them. In the downtown area, we just turned a two-way street into a one-way street with biking and walking. And we’re working on switching over our landscaping to more native landscaping; plants that come back every year and provide benefits for bees and other pollinators. We’ve moved the majority of our downtown to pollinator-friendly landscaping.”

The city also works closely with the local universities – JMU and Eastern Mennonite University (EMU) both have professors on the committee that helped with the Environmental Action Plan. “They were a great resource,” says Stimson. “We also have the Shenandoah Valley Soil and Water Conservation District here. They helped us create a program called the Harrisonburg Conservation Assistance Program, where we provide cost-share funding for property owners and business owners that want to implement conservation practices on their land. We budget $100,000 every year for that. Promoting environmental sustainability is very important to the city. Harrisonburg has a community-run composting program, a Farmers’ Market, and our water & sewer operations are energy efficient. We have a tree program, the pollinator program, and a water quality program. All the city departments are working together to keep Harrisonburg clean and green.”

In summing up the best attributes of Harrisonburg, Shull relates, “Harrisonburg is the economic capital of the Shenandoah Valley. Because of that, we see a lot of continued growth in the area and our projections show that continuing well into the future. We’re well diversified and obviously, with the universities, our average age is young. We also have a lot of retirement facilities here and our business sectors are balanced between manufacturing and technology and retail. Our marketing message to attract businesses is promoting that we’re a small metro area with a lot of amenities businesses need. We also have a beautiful quality of life in the Valley that makes it easy to attract employees and residents.”

Fletcher acknowledges, “Anecdotally, there are over 50 languages spoken in Harrisonburg City Public Schools and there’s a desire for folks to want to live in a community with that diverse environment. We are in the heart of the Shenandoah Valley – Shenandoah National Park is nearby. A lot of people come here for cycling; you can do mountain biking in the City or run or walk the trails. Our Harrisonburg Parks & Recreation Department offerings are top-notch. It’s just a very desirable and welcoming place to be because there’s so much activity going on.”

WHERE: Central Shenandoah region of Virginia

National reach. Planted on a 50-year foundation and facing the future, we offer an innovative consortium self-funding solution that is transforming health care financing for employers. With uniquely balanced expertise in commercial P&C, employee benefits and TPA services, LD&B is 100% employee owned and 100% ready to serve.