Halifax Transit – Part of the change

Part of the change

Business View Magazine interviews representatives from Halifax Transit, as part of our series on best practices of municipally-owned transit systems.

Halifax Transit is a Canadian public transport service operating buses and ferries in the Halifax Regional Municipality of Nova Scotia. Founded as Metro Transit in March 1982, and rebranded in 2014 as Halifax Transit, the agency manages 2 transit facilities, 13 Park & Ride lots, 11 bus terminals, 353 conventional buses on 66 bus routes, 3 ferry terminals, and 5 ferries. It also operates 47 Access-a-Buses, a door-to-door paratransit service for those who cannot use the fixed route service. With a staff of 1036, Halifax Transit’s operations are overseen from its headquarters in Dartmouth, Nova Scotia. Its annual operating budget is 65 percent from municipal property taxes and 35 percent from fares.

In an effort to boost ridership, Halifax Transit, under the leadership of its Director, Dave Reage, has been working diligently over the past several years to increase and improve the system’s offerings and services. A big part of that effort is encapsulated in its Moving Forward Together Plan, whose guiding principles include: 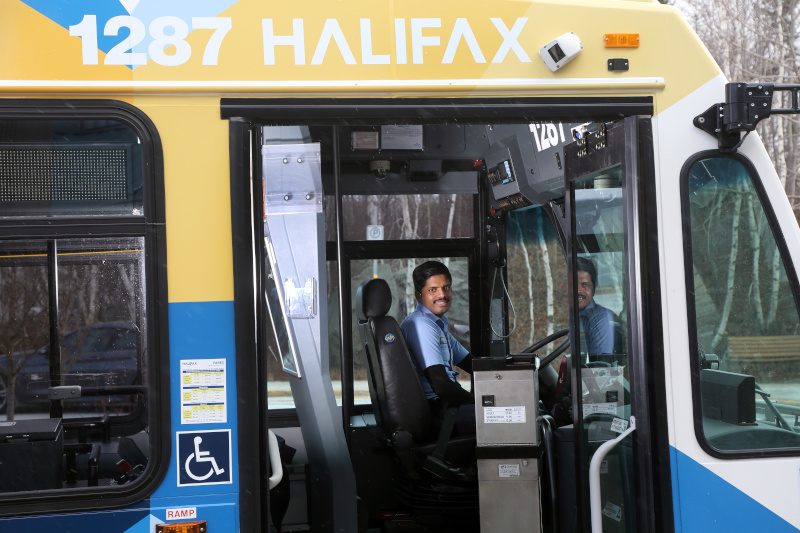 Another aspect of the Moving Forward Together Plan concerns a continuing effort to redesign service routes over several years – getting rid of obsolete ones and changing others where necessary. The 2019/20 fiscal year included changes to 19 transit routes, representing approximately a quarter of the existing transit service. Future route changes will depend on funding mechanisms, as well as operational capabilities.

The Moving Forward Together Plan was the most successful public consultation, in terms of number of people engaged, the Halifax Regional Municipality (HRM) has ever done. Rather than the traditional town hall meeting, Halifax Transit had members of a street team approach random citizens out walking, or at the grocery store, and give a 10-second outline of the plan, along with a card and website link where they could learn more and fill out a survey. “That type of innovative approach is the reason we had such a large response,” Reage explains. “The last time we did a plan like this we got 2,000 and our goal was to double that. This time it came back with 16,000 and blew our expectations out of the water.”

As the five-year plan begins to wind down, Reage says, “We’ve had success on that plan beyond our expectations in terms of significant ridership increases. Last year, we finished up 4.8 percent in revenue ridership; boardings were up 14.8 percent; and this year we’re up 7 percent revenue ridership, and boardings are up 8.5 percent. So, after years of stagnant ridership, we’re seeing really significant increases. And the Moving Forward Together Plan is a big part of that, but it’s not the only part of it.”

Another program that has helped make transit more accessible for more people is Halifax Transit’s partnership with the province’s Department of Community Services. “They now distribute annual transit passes to all of the residents who are on employment support and income assistance,” explains Patricia Hughes, Manager of Planning & Customer Engagement. “And not only to those residents, but also to their dependents and children. So, right now, we’re sitting at just over 10,000 annual transit passes that have been distributed to those residents, who are some of our most vulnerable, and it’s 100-percent free to them. It’s really quite groundbreaking and not something that we learned from other transit agencies and copied. And it’s definitely contributing to some of our increased ridership, as well.”

For residents who are not clients of the province through that program, Halifax Transit has expanded its own low-income transit pass program. “It allows residents to have passes at half price,” Hughes continues. “Halifax Regional Council has increased the program limit from a thousand to two thousand passes a year. We’ve also worked with our colleagues in Recreation Services so that the pass is consolidated with some of their programs for folks with low income, so they can now apply once through the city and be eligible for the recreation, and the tax relief, and the transit programs. In addition, we’ve been working on our E-Pass program, which are annual employer passes you can get from your workplace and comes as a payroll deduction. We’ve been promoting it, and our E-Passes were up 11 percent, last year.” In addition, a recent pilot program allows any youth under age 12 to ride free, and Halifax has had passes for its university and college students in place, for years. 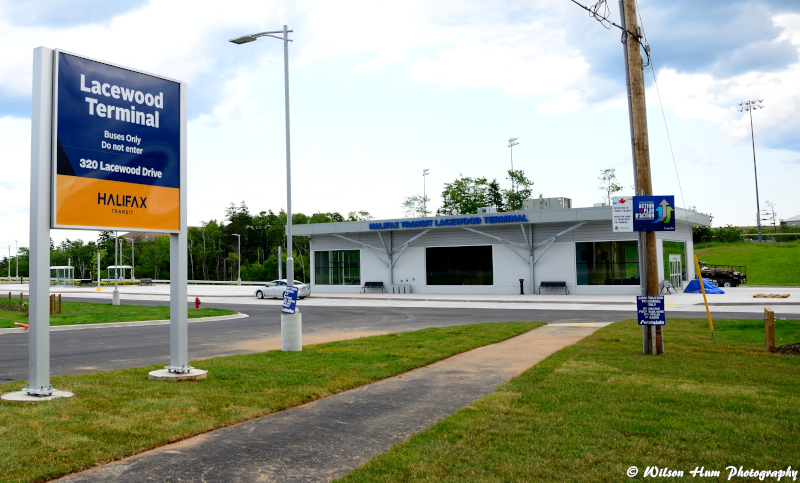 While making it less expensive for residents to take the bus, Halifax Transit also has made it easier for them to find buses and bus schedules via their smart phones and other connected devices. “We don’t have our own app, but we push out real-time data in a publicly-accessible format: GTFS, or General Transit Feed Specifications,” Reage explains. “That’s a standardized format. Google picks it up and you can use Google Transit to see real-time stop arrivals and things like that. And there’s a whole array of other apps that can pick up that data. So, it’s really the best of both worlds; it allows us to get that information out to customers, but we don’t have to get into the realm of developing and maintaining an app. The various app companies out there are way more nimble than we could ever be. It’s what they do and they do it well, so everybody wins in a situation like that. As long as you have the technology and we have the GTFS-based automatic vehicle locations system that pushes that out, then, certainly, any app can get that information out there.”

Reage is also focused on upgrading Halifax Transit’s conventional bus fleet. A recent proposal to the Halifax Regional Council concerns the creation of a Fleet Transformation Project Office. “That’s going to be looking at how we get away from our fleet being powered by diesel, and go, predominantly, to electrification and, potentially, to other fuel sources,” Reage shares. “The federal government has a real interest in the electrification of transit fleets, so we’re going to be setting up that project office with an eye towards having our first electric buses on the road within three years. But it is a pretty big effort to get that done, so rather than having people doing that on the sides of their desks, the thought is to set up this project office and have dedicated staff working to make it happen.”

Meanwhile, Reage says that upping on-time performance for its current fleet has been an ongoing concern. “In the last few years, we dove in, head first, with regards to transit priority and transit lanes on the streets,” he states. “We’ve got some transit lanes that are working well; and one that’s downtown. This spring/summer, we’re looking at the biggest construction year we’ve ever had, in terms of building transit lanes in the city. And the impact on riders is going to be pretty significant. In some cases, where there’s congestion, it’s a pretty slow crawl through some of these corridors. So, we’re very excited to try to get some bus lanes in there and get the service operating more efficiently for people.”

Hughes adds that Halifax Transit has also invested in its infrastructure. “We’ve built some really beautiful transit terminals in the last few years,” she reveals. “We get a lot of compliments on them. “It really comes down to: how do you make transit attractive enough to get people to leave their cars at home?” Reage adds. “By building transit terminals that are actually nice places to be – not just utilitarian, but well-designed and comfortable. How do you make the bus more time-competitive with the car? And that’s where the transit lanes and transit priority comes in. There’s no better advertisement for transit than having a whole bunch of people sitting in traffic and the bus goes right by them in its own lane. Some of those people sitting in their cars are going to look at that bus and say, ‘Next time, I’m going to be on that bus.’”

Reage says that changes are coming faster and better, now that Halifax Transit is working more closely with other parts of the transportation network. “I’ve been here 13 years, and it’s the first time I’ve seen all the various transportation departments, the active transportation folks, the traffic engineers, land use planners working so well together,” he enthuses. “We were just scratching the surface with what we were doing before, and we’re excited, now, to have a very collaborative team; everyone is very supportive of trying to encourage more sustainable modes of transportation. When we’re saying, ‘You’ve got to get that bus out of traffic,’ and the traffic engineers are saying, ‘We agree; let’s figure out how to do it,’ that’s the kind of unified approach to transportation that you need to have. That’s a big part of why we’re seeing the success that we’re seeing. We’re all singing from the same song sheet.”

“Everything that we’re doing is resulting in more people taking transit and at the end of the day, that’s what we’re here for,” Reage says, in conclusion. “There’s no one single thing. The Moving Forward Together Plan is having a big impact, but the various partnerships that Patricia spoke to are also having a big impact. They are allowing people who otherwise may not be able to get to, and participate in their communities, to do so. It’s important that we can get people to work and to their appointments, but the fact that people who otherwise wouldn’t be able to travel outside their communities can now do so, is just so key.”

“There’s a lot of positive change,” echoes Hughes. “Someone who was in Halifax ten years ago probably wouldn’t recognize the transit system now. There’s so much happening, and it’s an exciting place to be. We’re looking forward to the future and being part of the change.”

WHAT: A public transport service operating buses and ferries