Business View Magazine interviews representatives of The First National Bank of Groton for our focus on Top Community Banks in the U.S.

“We try to be friends, relatives, the whole works,” says President and CEO Stephen Gobel. “Our mission is ‘Customers for life. One day at a time.’ That instills in us the fact that every day we have that opportunity to cement a relationship for life with our customers.”

Those relationships start at childhood and live on through multiple generations of families trusting First National Bank of Groton for their banking needs. “We give out piggy banks to children opening up accounts so they can bring their coins in and put it through our coin machines and start developing their account relationships at a very early age,” Stephen says. “And we go all the way to helping people settle their estates. We work with them when they have the unfortunate situation of losing family members and dealing with those situations. Our customer service people go start to finish with all of that.”

Headquartered in Groton, New York, First National Bank of Groton was founded in 1865 by a group of businessmen who wanted to be able to do their banking within their own community. It set itself above the rest, increasing its earning potential along the way, and even breaking barriers by electing one of the country’s first female bank presidents, Welthea Marsh, in 1896. As the town of Groton grew as a center for manufacturing, so did the bank. Today, the bank has more than $200 million in assets and two locations with one in Groton and one in Moravia.

First National Bank of Groton has a full array of services for its clients, including personal checking and savings accounts, business accounts, loans, digital banking, and telephone banking. Despite being a small community bank, First National Bank of Groton has made some strategic partnerships, which allow them to compete alongside some of the heavy hitters. They recently partnered with a company called Kasasa to offer free rewards checking accounts. They also work with Kasasa to offer Kasasa Care, a service that works with community banks to offer products like identity protection and prescription savings. 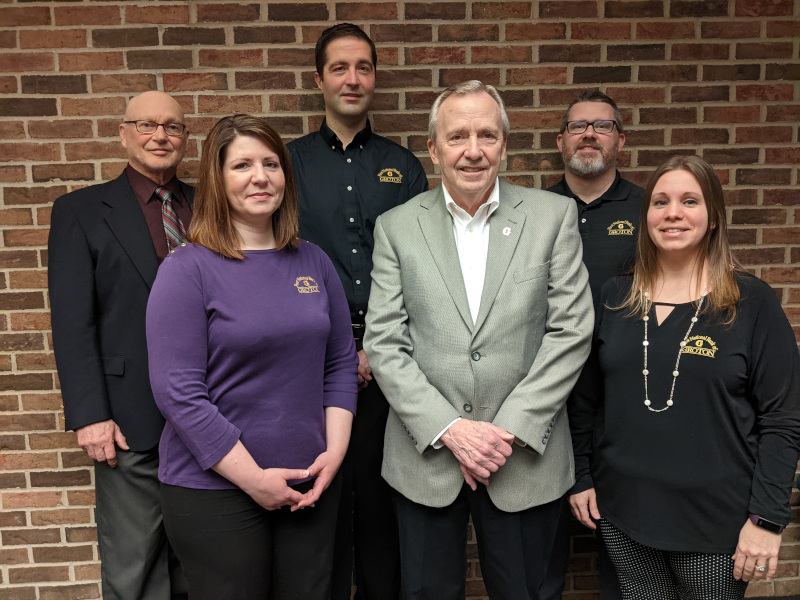 “It’s had good growth over the past year, since we started,” says the bank’s CFO and Senior Vice President Andrew Gobel. “It also helps provide us with a nationwide ATM network because it includes an ATM fee refund. So while we only have two ATMs ourselves, essentially to our customers it seems like we have them everywhere.”

The bank also partners with technology firm, Jack Henry & Associates for their payment processing services. “Jack Henry is our core provider and they provide a lot of services that basically can make us operate like a large bank, without actually being a large bank,” Andrew explains. “This allows us to still remain personalized and customer-focused.”

In addition to school fundraisers, the First National Bank of Groton also helps students in local schools with financial literacy and encourages students to get involved in banking as a career. “It’s kind of slowed down with COVID a bit, but we’ve attended many of the schools to give instruction and we used to have a program with the economics class where the students would try to start a business and we would help them in that respect,” Stephen recalls.

They also run a program to attract junior and senior high school students to try working in the bank part-time. The program has been a major success, with several students staying on at the bank for many years following. “We are quite involved with the schools,” Stephen says. “As a community bank, we spend a large amount of time socializing in groups within the community. A lot of people work on different committees and some are involved in the fire departments and churches and other organizations like the American Legion. That’s life in a small community.”

Not only does First National Bank of Groton treat its customers and community like family, its 38 employees operate like one large family themselves. “We are family-oriented,” says HR officer, Elizabeth Sears. “That’s one of the biggest things that draws people to work at the bank. They can see that everyone is tight-knit and cares about each other.”

Employees aren’t relegated to their own departments, everyone interacts with each other and has the opportunity to get to know everyone who works there. The result, is a warm and welcoming atmosphere that sets the bank apart from the rest. “We have, fortunately, been able to hire a number of people from other banks that are not community banks and when they do come here they become some of our best sales people for employment because they say how much better it is here,” Stephen explains. “We all have our tough days, but it’s nice to hear when you bring someone in that has been in another institution and speaks well of you.”

In addition to the welcoming corporate culture, the bank offers an attractive career to many with valuable employee benefits, including a 401K and health insurance. Not surprisingly, First National Bank of Groton has little turnover among its employees, with many sticking around for decades. Stephen Gobel himself has been bank President since 1978. He acknowledges, “We’ve been pretty blessed with having a lot of employees who have been with us for many years and dedicate themselves to the bank and to the communities. It’s not uncommon to have 20-, 30-, or 40-year employees, and we really thrive by having that.”

When the COVID-19 pandemic hit in March 2020, more than half the bank’s staff were sent to work from home. That divide only strengthened the bank’s desire to keep a close familial atmosphere. “People had to wear a lot of hats and we had to communicate a lot and that was huge,” says Karen Whatman, First National Bank of Groton’s VP of Operations. “We had people from audit and HR and finance answering phones and we got to introduce some people to our customers that way. Our staff pulled together and we made it work and it was great. We had people working from home who would drop off food or snacks. It was great for morale. The whole bank pulled together and did what we had to do to get through it.”

The pandemic came with other benefits to the bank, as well. It encouraged First National Bank of Groton to advance their technology sooner than they would have otherwise, providing even greater service for their customers. According to Andrew, “It pushed us forward a little quicker with regards to technology and implementing new products that make it easier to reach the customer than it did in 2019. Online loan applications and online account opening is one thing that we’re pushing to finalize this year. We also used DocuSign to be able to reach people when they couldn’t come in. Getting more cutting edge is something that we realized from the pandemic is what we need to do.”

Senior VP Alan Christopher adds, “During the pandemic banks took in a lot of stimulus money. Customers were staying home and spending less. This factor, along with experiencing a slowdown in our local loan demand added to our liquidity. Many, like us, looked to deploy those deposits to get some sort of spread. With all the extra cash on hand, we turned to buying loans through the BHG Financial (formerly Bankers Healthcare Group) program. We were new to the program and the staff at BHG Financial helped us through the entire process. We found purchasing the loans turned out to be quick, safe and easy, and has had a nice effect on our bottom line.”

As First National Bank of Groton moves past the pandemic and into the future, they hope to keep pushing to add new technology and new services for their customers, while maintaining that friendly, familial, community-focused mission that they’re known for. While mergers and consolidations may be happening to smaller banks across the country, it’s not in the cards for this community bank.

“We obviously want to remain independent,” Andrew says. “That’s what we’ve always been focused on being and I don’t think our shareholders would like it if we were no longer to be that small, community bank that we’ve always been. As far as our growth potential goes, I think it all lies in the technology being able to match what the larger banks have, and thankfully, our partners are able to help us remain competitive in that aspect.”

The First National Bank of Groton

What: A small community bank with a 157-year history

Where: Headquartered in Groton, NY with a second branch in Moravia