The construction industry is as diverse as it is a huge and dominant force in the economy. An industry replete with niches requiring highly specialized expertise and skills, of which marine construction and deep foundation are excellent examples. These are highly technical and complex construction processes requiring the very best in the industry.

The family-owned Ebsary Foundation Company, which has been in business since 1922, is the epitome of a highly-skilled construction company. Ebsary considers itself a pioneer in marine construction and deep foundations, as well as sound walls, bridge construction, support of excavation, and other major construction and engineering works. Today, the firm is an industry leader throughout Florida.

Matthew Shiring, Vice President at Ebsary, shares his insights into the company’s evolution, including its unique approach to growth and the internal strengths that make it a company he’s clearly proud to represent. Shiring started out as a field superintendent for McLean Contracting; a large marine contractor based in Baltimore, Maryland. It was during a visit to Florida in 2006 that he discovered a company driving piling out on the beach in Fort Lauderdale. It was a beautiful, 74 degree day and Shiring was smitten. He took note of the name – Ebsary Foundation Company – and contacted them once back in Maryland. Fast forward to Labor Day weekend of 2007 and Shiring had moved to Florida to work for Ebsary. 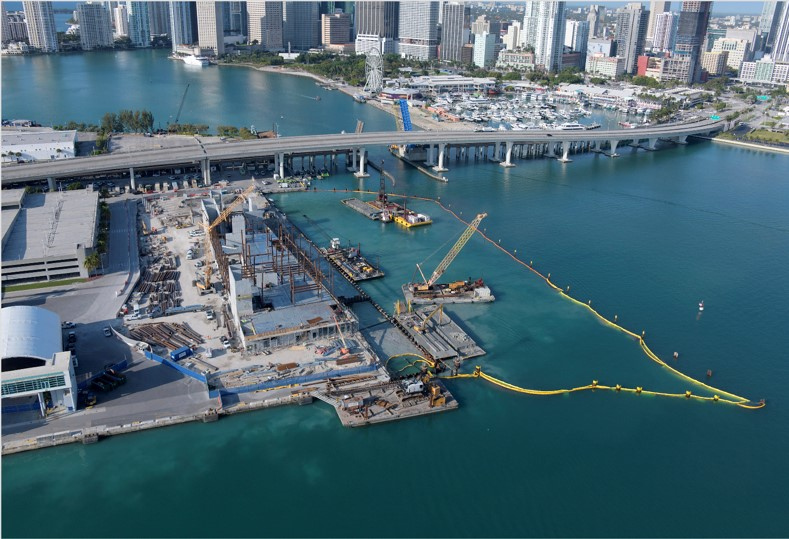 Until then a relatively small company, with a long history in deep foundations, the largest opportunity for Ebsary’s recent growth came in 2010-12. It was a massive heavy highway and marine project with Dragados, USA, a large Spanish firm that is one of the largest construction companies in the world and a subsidiary of the Madrid-based construction and engineering conglomerate, ACS Group. The project was the I-595 roadway expansion, which is the Interstate connecting I-75 to I-95 in Ft. Lauderdale, also known as the Port Everglades Expressway. It was a Public-Private Partnership (PPP) initiative, one of the first of its kind, between the Florida Department of Transportation (FDOT) and the Dragados/ACS consortium, for which Ebsary was a key sub-contractor.

The I-595 work resulted in nearly 3 years of heavy highway, bridge and marine work and a total contract value in excess of $30 million.  The sustained work Ebsary performed on I-595 allowed for the “Organic Growth” that Shiring expresses is key to Ebsary’s success – which included hiring permanent personnel and procuring extensive amounts of key equipment, which stayed with the company for future work.

In 2010, Scott Alfele, the Great Grandson of its founder, took over as President of Ebsary from Richard Ebsary, the third generation of the family to run the company. Shortly after, Shiring became Vice President.

“The last decade or so has seen a concerted effort by the company to re-establish ourselves as a South Florida leader in marine and heavy civil construction and to continue to strengthen the Ebsary brand,” says Shiring. “For decades, Ebsary has been a reliable and successful foundation and marine contractor, who relied strongly on its reputation to garner work. However, once we experienced the sharp growth from the I-595 project, we had the resources necessary to expand our presence and name recognition; actively seeking work through the state – in Jacksonville, Tampa, Key West, and everywhere else in between – and ensuring our name is prominently shown on all equipment.”

When asked whether Ebsary has plans to expand beyond the size and region it currently operates in, Shiring notes, “It’s definitely an active conversation Scott and I have often – how to manage controlled growth without getting ahead of our ability to control our work.” Annual targets set in stone are not contemplated given Ebsary’s focus on controlled growth.  Of course, there is a minimum threshold of income that the company needs to generate each year to cover fixed annual operating costs and desired profit. Anything beyond that threshold is a question of what actually benefits the company without assuming excessive risk or limited long term reward.

Ebsary actually grew its business during the COVID-19 pandemic, which included purchasing a second office in Broward County in addition to its Miami office. Extensive project opportunities were available during the pandemic due to the decision by Florida’s Governor, Ron DeSantis, and other state and local authorities, to accelerate public works projects. Also, minimal use of roads and heavy commutes during lockdowns meant that work was more efficient for heavy civil contractors, like Ebsary, to accomplish.

Longer-term goals continue to be a focus on maximizing opportunities and what Shiring calls “flexing with the industry.” This refers to how commercial and public sector work in certain markets can explode then suddenly retract based on market conditions. Foundation piling for high-rises may be in abundance during housing market booms but will retract during bear markets. This also includes heavy civil municipal projects, which often react to both markets and needs and also to Government funding, like stimulus programs. 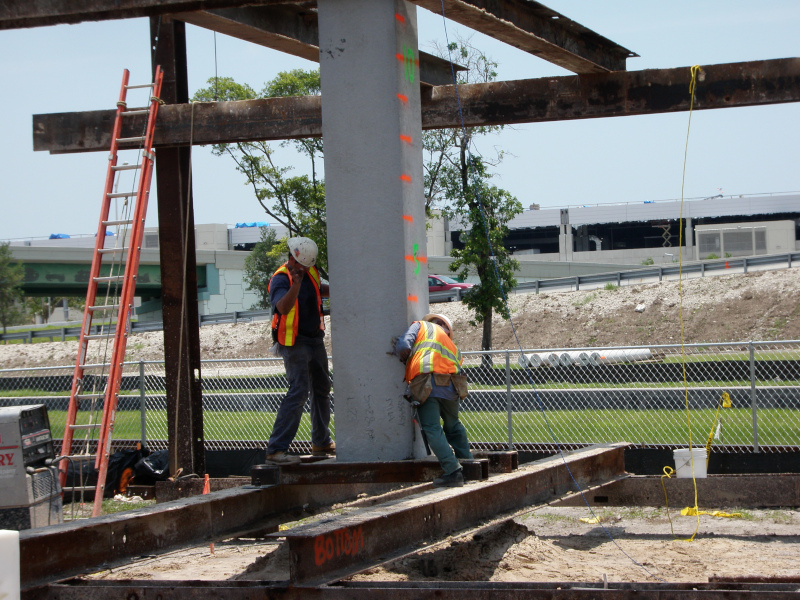 Ebsary adapts to the market changes by focusing their efforts on whichever market is most abundant at the time. This was most evident during the condo and housing boom in the 2000s, when Ebsary was nearly entirely vested in commercial deep foundation work, right up to the sudden market collapse in 2008. That collapse of the commercial and residential market would have severely crippled Ebsary had they not been able to make the shift to focus more on available Heavy Civil Projects, like the I-595 project.

Larger-scale civil engineering projects can also create this flexing within Ebsary’s industry, such as when a unique regional project arises – as seen with I-595 or when Port Miami announces a major cruise terminal reconstruction. The company shifts back and forth or ‘flexes’ its primary focus on specific project opportunities when they are available. Shiring believes Ebsary’s complete and diverse suite of skills and expertise allows it to be highly versatile and flexible in the private or public sector, whether marine, civil or deep foundations. He states, “We’re able to perform work across all market sectors in the heavy construction arena, always adjusting our focus based on availably not just one specific area.”

Given the company’s diverse expertise, there is cross-training for all employees; however, those with specific skills sets are often required for certain projects. Executives and managers, like Shiring, are involved on a weekly basis at the operational levels of all jobs, guiding manpower and equipment adjustments, so the right people and equipment can be placed where most effective. Often times, when required, a given supervisor, individual operator, or crew will stay on a job accomplish one specific task and then be transferred prior to overall completion.

This hands-on approach by Ebsary may differ from larger construction companies that might not be able to afford to have executives so intimately involved with every crew, superintendent, and foreman. According to Shiring, “It’s what keeps the company streamlined and compact in size, yet still able to take on diverse, complex jobs across various market sectors. This approach translates into the controlled growth that Ebsary has enjoyed. The key focus is to ensure that everything is done as efficiently as possible. Maximization of effort is all-important.”

The Ebsary approach relies on maximizing the skills of its available workforce, most precisely with a given project. It does so on the basis of commercial and logistical feasibility that makes sense, which means that underbidding or bidding a target cost ‘simply to get the project’ is not the way it does business. That includes who they use as sub-contractors and suppliers. As Shiring explains, “We don’t focus on the cheapest price for everything we do. We assemble project bids based on who we feel most confident can get the job done, not the cheapest. If we don’t get work as a result of carrying certain sub-contractors and suppliers, we would rather not get it for our price than to get it for an artificially low or risky price.”

The Ebsary reputation and quality of work pays off in every project they take on. Sometimes, it means that the company will deprioritize hard bidding, preferring projects through negotiated work with trusted relationships, whenever available. One such example of collaborative, trust-based negotiated work that Ebsary has undertaken is for Fisher Island – a highly exclusive community three miles off Miami Beach.

Shiring also proudly shares how McLean Contracting Company, a construction powerhouse based in Maryland and Virginia, considers Ebsary as its first choice to partner with for work it might have in the Florida market. Shiring himself has strong ties with McLean, having worked for them for many years before relocating to Florida. Another trusted partner is Bradshaw Construction with which Ebsary has collaborated on various projects since they first worked together on the I-595 project.

Maintaining relationships with trusted contractors and collaborators alike, as well as maintaining its robust reputation, are clearly the cornerstones of the company’s success. That tradition of excellence should stand Ebsary well in the years ahead.

What: Pioneers in marine construction and deep foundations

Where: Headquarters in Miami, Florida