Environmentally sustainable progress and expansion are driving forces in Coolidge, Arizona that are taking this rural city to new heights. They have already begun to put the municipality on the map for clean energy sustainability projects.

The region’s electric vehicle manufacturing sector has also boomed to the point that Rick Miller, City Manager says they’re being called the ‘next Detroit of sustainable vehicle production’. Coolidge’s ideal location midway between the metro areas of Phoenix and Tucson, near Interstate 10 & 8, are driving forces behind the industrial growth in the area.” 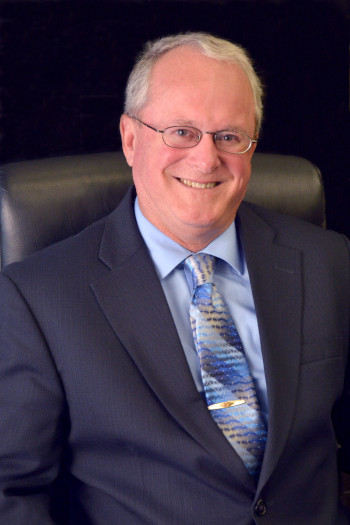 The city’s employment and housing sectors are seeing exciting growth, as well, with people being drawn to the area for obvious reasons. Miller notes, “Our location and climate make it the perfect place to live and to escape the drudgery and lack of vitamin D of northern winters. In Coolidge, the sun shines the majority of the time and even in the winter it’s a balmy 70 to 80 degrees. When you look at why somebody would want to come to this region, really the climate is a big deal. You have all the sunshine. There are no tornados, no earthquakes, no major natural disasters, it’s just an ideal climate.” Coolidge is fortunate to have the first archaeological preserves in the United States National Park Service system. The Casa Grande Ruins attracts nearly 100,000 visitors each year to witness this prehistoric native American ruins.

The community currently has a population of about 15,000 and is located in Pinal County in the Sun Corridor of the State of Arizona – halfway between Phoenix and Tucson, which offer all of the entertainment and urban amenities of larger centers.

While Coolidge has predominately been an agricultural mecca, Gilbert Lopez, Development Services Director, says major expansion plans are in the works and there is community buy-in to the idea of changing some of the rural landscape into a thriving energy and manufacturing sector. Lopez recounts, “When residents see me in town, they are always asking for a wider variety of restaurants and retail options that come with an increased population. People are really excited; they want to see things happen, so it’s really a good time and puts Coolidge in the spotlight.”

While industrial and commercial activities may be rapidly expanding, city staff are also well aware that people are looking for outdoor activity and immersing themselves in nature. Coolidge is located in the Sonoran Desert, which offers beautiful hiking and biking trails, incredible views and is perfect for outdoor exploration all year. “The area’s natural wonders offer something for everyone,” says Miller, “It’s absolutely perfect for outdoor activity such as sky diving. There are a lot of small airports in the community, and if you’re an aviation enthusiast you can come here and fly all year-round.”

Former farm fields have converted to utility scale solar projects, producing more than 400 megawatts of power. One of Arizona’s largest power suppliers, Salt River Project (SRP), in turn provides this green energy to companies like Facebook, Google and Intel. SRP, has also negotiated a power purchase agreement with NextEra Energy for another 88 megawatts including a battery storage facility. Currently, 4,000 acres are already producing clean energy and more will come online in the coming years. Miller acknowledges, “Alternative energy has become a major component of land use representing about 16 percent of our total planning area boundary. Coolidge is fast becoming one of the largest sustainable energy producers in the state.” 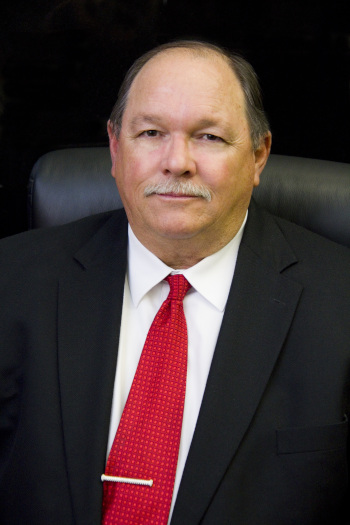 The Salt River Project also has a gas fired electric generation plant with 12 aero derivative turbine engines and is in the approval process for 16 additional turbines. This nearly $1 billion project, according to Miller, will help ensure electrical customers don’t experience rolling blackouts or brownouts during peak energy demands.

Stinger Bridge and Iron is another large employer in the area and produces sophisticated bridge structures, including the Gerald Desmond Bridge in the Port of Long Beach. The steel was fabricated, assembled for fit, disassembled and shipped from Coolidge to one of the world’s busiest port cities.

Nikola Motor Company, a manufacturer of zero emission, battery electric and hydrogen class 8 semi-trucks is building a plant in Coolidge that will have over 1,700 jobs at build out. This facility is located within the Inland Port of Arizona, a 2,700 acre shovel ready rail served industrial park. Much of Coolidge’s industrial expansion will occur in this major employment center.

The industrial expansion is creating a significant housing demand and numerous homebuilders are actively building in the region. Coolidge issued approximately 700 new single family home permits in 2021. Miller says “I don’t see much of an end in sight right now for new home development.” To help residents become work ready, skills training is provided locally at Central Arizona College, Central Arizona Vocational Institute of Technology, and two nearby universities including University of Arizona in Tucson and Arizona State University in Phoenix.

Another wonderful attribute of the City of Coolidge is the historic downtown core, which houses city hall, business services, county offices, novelty shops and eateries. The city has invested heavily with major street reconstruction efforts including Coolidge Avenue, Main Street and Central Avenue. In addition, many buildings are being updated and landscape projects are being completed to make the downtown even more inviting. In one special initiative, the city partnered with Arizona Water Company to restore the 90-year-old fully functional water tower fitted with LED lighting and can be seen from miles surrounding the city. 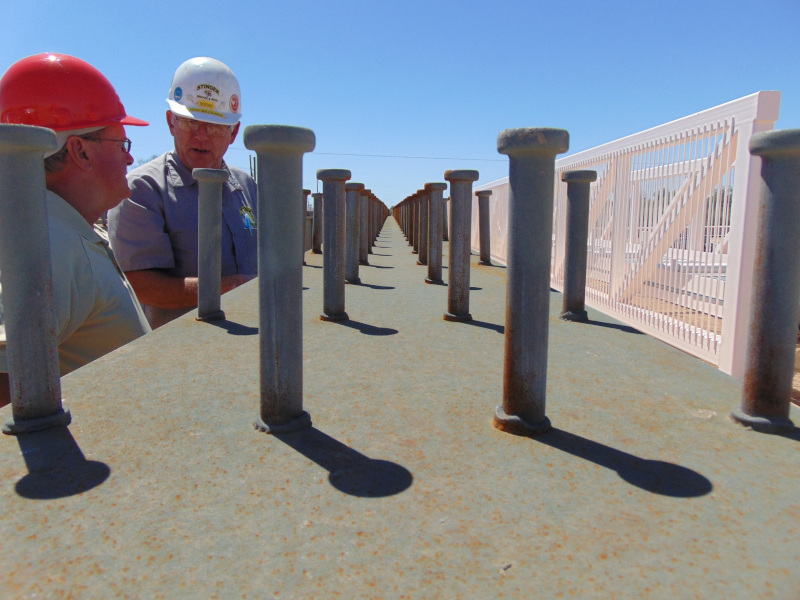 The city municipal airport was recognized as “2017 Airport of the Year” by the Arizona Department of Transportation, Aeronautical Division. This airport hosts popular monthly fly-ins with a local Lions Club serving breakfast to spectators and pilots. The airport is also a spring destination for the Air Force Academy glider training program. The airport is also home to allied and domestic paratrooper training through Complete Parachute Solutions.

Miller shares, “I want us to continue to create an unparalleled quality of life for residents. To create a community that people want to come to live and enjoy.” He acknowledges that the city faces challenges like any other, but with a supportive council, administration, and fruitful partnerships they can achieve those goals to continue improving the community. He adds, with pride, “The City of Coolidge was named after Calvin Coolidge, the 30th U.S. President. In one of his quotes, he references, “the business of America is business” and that kind of sums up what we’re all about.”

Where: Pinal County in the Sun Corridor of Arizona

Arizona’s growth is exciting to watch- from an accelerating population, to economic development, the transformation within the state is undeniable. The national spotlight extending from Maricopa County to other growing counties within the state – such as Pinal County – has placed Arizona further on the radar for various stakeholders in the real estate industry.

Walton Global is one of those stakeholders that has been following Arizona growth patterns since the early 2000s and buying land to support economic development and the population spikes in Maricopa County, as well as outlying areas. As a Scottsdale-based land asset manager with 8,793 acres currently under management in Arizona, out of its 98,000-acre portfolio totaling $3.4 billion in North America, Walton is directly invested in Arizona’s future.

“About 15 years ago, we could see the potential in Arizona and we decided to purchase land to support the growth,” said Bill Doherty, CEO of Walton Global. “Although development has taken longer than we originally anticipated due to unforeseen challenges, such as the Recession and water supplies, the tremendous effort to create a pro-business environment made by Governor Ducey and agencies, such as the Arizona Commerce Authority, Greater Phoenix Economic Council and the Arizona Technology Council over the past several years, is showing great progress for these suburban communities, in addition to people just wanting to live in Arizona.”

Walton is working with its large network of builders and developers to support the development of affordable housing for Arizona residents, as well as growing sectors in the state, such as the industrial sector. The real estate investment company is actively searching for additional land opportunities throughout Arizona in 2022.

“We understand water has been and is a challenge for these developing communities, including Coolidge, and we are committed to sit alongside all water stakeholders throughout Arizona to work toward a solution,” said Doherty.

Walton currently manages 2,653 acres of land in Coolidge and is supporting the City’s business plans.

A Partner in Economic Growth and Opportunity

Salt River Project (SRP), a not-for-profit, community-based utility company, provides power to more than 1 million customers across 15 Arizona cities and delivers nearly 750,000 acre-feet of water to the region each year. All of this is done with a focus on ensuring the state’s continued sustainability and growth.

Resource availability is paramount to a company’s performance, productivity and profitability. SRP’s energy sources, including peaking gas, solar, wind, geothermal, biomass and large and low-impact hydro, are instrumental in powering this thriving region.

Among those that benefit from SRP’s community support is the United Way of Pinal County, an organization that provides services for those facing hardship in the region.

“SRP donations are not only a lifeline,” said Allen Villalobos, Chief Executive Officer, United Way of Pinal County. “They can also help [us] begin to reimagine and rebuild communities so that everyone has the opportunity to thrive.”

By embracing a shared responsibility to build a reliable, sustainable energy future, and investing in communities like Coolidge, SRP helps solidify Arizona as one of the country’s best places to live and do business.