Hub of the Inland Empire

Virgil Earp, who led his brothers and Doc Holliday during the famous gunfight at the O.K. Corral in Tombstone, Arizona, spent his entire career as a pioneering lawman. In addition to serving as Tombstone’s city marshal, he also went on to become the first constable for the newly created town of Colton, California. At a time when Colton (1883-1889) was the nexus for two key transcontinental rail lines and one of the busiest little towns in the West.

“Colton was developed around the railroad,” says Mayor Frank Navarro. “The BNSF Railway, formerly the Atchison, Topeka and Sante Fe Railway (ATSF) back in the day, travels generally north and south. And Southern Pacific, which was acquired by Union Pacific, generally travels east and west. In Colton, the two lines met at grade. As I recall, Southern Pacific moved into San Bernardino intending to cross ATSF in Colton. ATSF had, at the time, what they call in railroad language a frog intersection, where a train heading in one direction would have to wait for trains heading in another to clear the junction before it could cross.”

First built in 1883, Colton Crossing was the site of one of the most intense conflicts in railroad construction history. It even led to an altercation between Virgil Earp and then-California Governor, Robert Waterman. “Virgil’s brother, Morgan, is buried here in Hermosa Cemetery,” says Navarro. “Their father was Colton’s first city clerk and justice of the peace. The entire Earp clan lived here for quite some time.”

Strategically located in the heart of the Inland Empire – a metropolitan region defined as the cities of western Riverside county and southwestern San Bernardino – the City of Colton today encompasses approximately 18 square miles of fertile valley nestled against the scenic San Gorgonio Mountains. Originally, the city consisted of just 200 acres along the Santa Ana riverbank in a settlement called La Placita. Mexican labor came in to help build the railroads and established long-lasting, multigenerational communities in this area where small, quaint homes were built by the rail workers. The then-town of Colton continued to grow and prosper, the Chicano barrio in its south side also grew, through natural increase and continued migration from the east and south. “Our population is currently 54,000 and the demographic is about 72% Hispanic,” says Navarro. “We’re not an affluent community, we’re mainly a blue-collar community, with our share of higher incomes as well. A lot of hardworking people.”

Named after David R. Colton, a Southern Pacific Railroad official, the City of Colton also happens to lie at the intersection of two major freeways, the I-215 and the I-10, as well as the intersection of railways, making it a hub city par excellence. “Because of our strategic location, logistics found us,” shares Christy Elshof, Economic Development Project Manager II. The City welcomed a Walmart-owned, 340,000-square-foot high-tech consolidation center last July. Also situated within what’s known locally as the Agua Mansa Industrial Corridor are Lineage Logistics, the world’s largest refrigerated warehousing company, and C.R. England, the nation’s largest refrigerated truck company.

“The City of Colton itself has over 400 employers,” says Navarro. “And we’re trying to attract more businesses in the Agua Mansa corridor. Our developers are making offers and trying to purchase to assemble sites to accommodate a warehouse or a distribution centre. One deal that was successful was Hillwood Enterprises – a Ross Perot company. Hillwood developed a 400,000-square-foot facility and they landed a tenant called Avalon Apparel, a women’s clothing manufacturer based out of New York and Los Angeles. They’re sending their clothing to higher-end stores,” Elshof adds. “We actually have a couple of apparel companies at Agua. We also have a nice-sized food cluster, including a churros manufacturer—California Churros – and other bakeries and snack food manufacturers.” 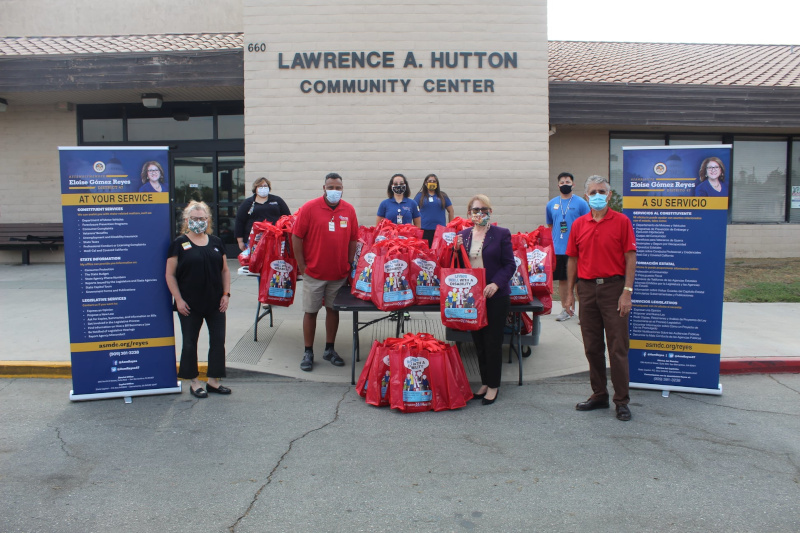 The southwestern portion of the City of Colton is known as Pellissier Ranch, and is the site of a proposed 336-acre planned community development that would include up to 874 residential dwelling units comprising a mix of 450 low density detached homes, 293 medium density conventional detached single-family homes, and 131 high density attached townhomes. The project, known as Roquet Ranch, also proposes non-residential uses of the acreage, including over 19 acres of recreational open space (located primarily on the northwest portion of the site), nearly 200 acres or preserved natural habitat, a one-acre fire station site, and a ten-acre school site.

They’ve also just completed 175 single-family homes in the Hub City Centre area, near the Arrowhead Regional Medical Center (ARMC) and the newly accredited California University of Science and Medicine facility (CUSM). The ARMC is a state-of-the-art teaching hospital moving from a Level 2 Trauma Center to a Level 3, and houses a nationally recognized Burn Unit. “We’re hoping to attract buyers to those homes who are doctors and teachers, as well as medical students,” says Art Morgan, Director of Economic Development. “About 4,000 employees work out of the Arrowhead Regional Medical Center, and receives more than 1,600 daily. We see it and the new medical university as our anchor tenants for that area. We’ve got a unique opportunity to develop something special out there.”

“Not only do we have the ARMC and CUSM, but to the east is Loma Linda University Medical Center, and to the west is a large Kaiser Permanente facility,” says Elshof. “We’re talking a handful of miles in either direction. We’re looking for part of the Hub City Centre to develop as a medical R&D, independent medical offices, and training centers to use the housing and retail planned for the area. In the future, CUSM is looking to do a physician’s assistant program. They’ve got lots of programs like these coming up. We see this as a potential incubator for R&D and other medical options here in Colton.” Although CUSM’s building only just opened this year, the institution held its first classes for the MD program back in July 2018. CUSM had been operating out of a classroom facility in San Bernardino, but they’ve since moved back here to Colton, where they belong.”

A full-service city is one capable of funding and providing a complete array of in-house public services to residents, without contracting anything out to third-party agencies. Colton is just such a city – it owns and operates its own electric, water, wastewater, police, and a fire department that provides mutual support to neighboring cities. According to the Mayor, that’s a very attractive “in” to what they’ve already got to offer businesses considering Colton as a home base. “These are our people that are working those facilities and providing those services,” Navarro says. “Colton has had the lowest residential rates on electricity for the last six years now, and I don’t foresee us making any adjustments.”

The City has deployed an aggressive sustainability strategy to meet the greenhouse gas requirements mandated by the State of California and the Federal Clean Air Act. There’s a robust electric vehicle infrastructure already in place in Colton, and they’ve joined the Climate Mayors Electric Vehicle Purchasing Collaborative to purchase more electric vehicles for their fleet. And Colton’s Electric Utility was awarded the number seven spot on the national Smart Electric Power Alliance list for small cities’ solar accomplishments and annual watts of solar energy installed per customer. “We’re working very effectively, efficiently, and proactively to meet those requirements that the State is mandating,” Navarro assures.

Having been through the pandemic like everyone else, the City of Colton has emerged from 2020 with the mindset that whatever they’re up against, they can beat it. “Since I’ve been on the City Council, starting in 2012, we’ve worked hard to establish a vision for the community of Colton and to let developers know that we’re business friendly” says Navarro. “We welcome any business that wants to come into Colton, to explore the possibility and the venture of their investment. Look at Colton. We want your input as developers. Talk to us about your vision as far as your business is concerned. And we’ll work with you to weave that business into our vision for the City of Colton. As our motto says, Colton Means Business. It’s an exciting time for us. We had lots of new development in the pipeline that is now being built, and we do not plan to slow down.”