Business View Magazine profiles Bay City Michigan, a city of 35,000, located in East-central Michigan near the base of the Saginaw Bay on Lake Huron.

Like many places in the state of Michigan, Bay City, a community on the Saginaw River near the base of the Saginaw Bay on Lake Huron, has seen better days. At its height in the mid-twentieth century, it was home to over 50,000 people, many of whom worked in its shipbuilding facilities and automobile manufacturing plants. Today, Bay City’s population is stabilizing at around 35,000. “We have been, up to this point, losing population, although the recent census shows the loss to be very minimal,” says City Manager, Richard M. Finn. “Our goal is to stop the loss of population and start to increase it over a period of time.”

Finn understands that attracting new businesses to replace the old ones that have gone is key to increasing the population rate. And he believes that Bay City is well on its way in implementing the strategies and initiatives designed to make it a place where businesses want to set up shop. “We are coming out of the recent Recession and things are vastly improving,” he states. “I would characterize what’s going on here in Bay City as almost a rebirth.”

Part of that rebirth is the total redevelopment of Bay City’s downtown, just completed this past summer. The over $2 million project included the resurfacing of streets, new landscaping, and the replacement of 39 trees in the downtown business district. “That was a commitment by the city, working with our partner, the Downtown Development Authority (DDA),” explains Finn. “Between the two organizations, we funded that entire project. That was done, first of all, because it needed it, but secondly to show the community – especially the business community – that the city is very committed to moving forward, working in partnership with the business community. Since the renovations, there have been more businesses opening downtown.”

To help those new businesses thrive, Finn also knows that the downtown area must be a location where people want to visit, shop, and linger. He says that the downtown redevelopment project was completed this past summer, purposely, to coincide with the city’s hosting of the Tall Ships Celebration. “Every three years, we have somewhere between 12 and 18 tall ships come into the city along the Saginaw River,” he relates. “We’re one of their ports of call along the Great Lakes. We have them for four or five days, and that brings in over 300,000 visitors, all coming to see these majestic tall ships. And, this year, they came into a brand new downtown.”

To further enhance the downtown environment, Finn says that the city-owned, municipal electric company is on “a very progressive schedule of replacing all of our decorative lighting in the downtown area. That was part of the project and our pledge to the downtown and the entire city,” he says. “A number of streets have already been completed and the City plans on finishing up the downtown in the next two to three years. We’re also looking at all the other commercial areas in the city, for the same thing. We’ve got four other business areas in the city and each one of them is in the process of being redone and repaved. We’ve upgraded the street lights to LED. The rest will be done in the next two years. And all of our commercial areas within the next three to five years will all have LED lighting.”

Another major city project is the re-purposing of an old industrial complex area near downtown – one with a lot of abandoned buildings. “In 2009 the city moved forward with a very bold plan to create a brownfield redevelopment area. It functions like a TIF (Tax Increment Financing) district,” Finn explains. “That gave us a funding source to come in and purchase the properties and then clean up the site. We used borrowed funds that the city had obtained through bonding and, working with a local development firm, Shaheen Development, worked a plan out, where right now, it’s created about 500 new jobs and it’s only half built out. The money that’s coming into the city is actually exceeding what we need to pay back the bonds – so that’s a very positive thing. We still have half of the development to build. We anticipate that if things continue, the development will be built out within the next five to seven years. It brings a lot of credibility to the things we’re trying to accomplish here.”

Part of what Bay City wants to accomplish is a diverse economic base that is not dependent upon one industry or one major employer. “We have a GM plant and it’s still functional and we are grateful for that. There are about four or five hundred employees there,” Finn says.  “But, when GM was at its height years back, there were three or four thousand employees at that plant. We are looking at more diverse types of opportunities as we work towards more economic development. We don’t just want to have one large employer like we did. So, we’re not really looking for the two and three-thousand job employer as much as we’re looking for the hundred and two-hundred job opportunities to come in and locate and stay for a long time. We provide various economic incentives to do that and we’re seeing a lot of positive things starting to happen with the economy starting to bloom.”

In anticipation of new residents coming to Bay City for the new jobs, Finn says that, as part of its master plan, the city has recently completed a comprehensive housing study. “The city has been around for a long, long time and we have a lot of houses that date back, in many cases, over a hundred years,” he says. “We have a lot of issues with some of the older housing and this study develops a very good concept, step by step, of what the city needs to do over the next five to ten years to remain not only strong commercial-wise, and industrial-wise, but also residential-wise.”

Meanwhile, the private sector in Bay City is also becoming residential-wise. “We’ve got two new downtown developments that are re-using existing historic buildings,” Finn relates. “One is being converted into condominiums with 44 units. These will be market-rate housing right in our downtown area, two blocks from the river. The other one is the old Chemical Bank Building that happens to be a 125-year-old National Park – certified historic structure. We have a developer that is working towards restoring this historic building. The first level will be commercial with a fine restaurant and the rest will be condominium units on the upper floors also at market rate.”

Finn is especially proud that the city’s stakeholders are all inclined to preserve some of Bay City’s historic buildings. “A lot of communities, over the years, have knocked down a lot of historic buildings and have come to regret it,” he laments. “We have chosen not to do that. We’ve looked at how we can re-purpose and re-use them.”

In addition, Finn happily admits that the city is not alone in pursuing its revitalization goals and gives much credit to a main stakeholder and partner, Bay Future, a quasi-governmental agency that functions as Bay County and Bay City’s economic development arm. “We’ve gotten to a point, now, where it’s not the city versus the townships, or the city versus the county,” he insists. “It’s a cooperative effort. We realize that wherever industry might go, whether it’s in the city or just outside the city, that it benefits all of us. And we are working closely through Bay Future and all the local governmental agencies to enhance the economic development throughout the entire Bay County area.”

Finally, Bay City’s City Manager restates the City’s agenda in no uncertain terms: “The city is very, very committed to good, positive economic development,” he declares. “We are looking for companies that want to come to a city that is very progressive and on the move, and we’re always looking for any way that can move us forward through networking and partnerships. Partnership is where government needs to go and that’s where Bay City is proceeding in a rapid manner.”

Check out this handpicked feature on Park Forest, Illinois – Sustainability and development.

WHERE: East-central Michigan near the base of the Saginaw Bay on Lake Huron

Chemical Bank –– The state’s leading community bank since 1917, the Chemical Bank of Michigan has 175 banking offices spread over 47 counties. It has assets of $9.5 billion and offers personal and business banking services, as well as wealth management services for individuals, businesses, and non-profits. – www.chemicalbankmi.com 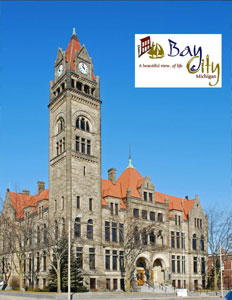