The City of Banning is located in Riverside County, California, in the San Gorgonio Pass, between Mt. San Gorgonio on the north and Mt. San Jacinto to the south. Various tribes of Indians, notably the Serano and Cahuilla, were well established in the region when Mexican and Spanish expeditions reached the area around 1774. By 1824, the San Gabriel Mission Fathers established a branch of the Mission at the highest point in the Pass, along the foothills northwest of Banning, where they raised cattle, sheep and pursued land cultivation. By that time, the area was known as Rancho San Gorgonio.

The first Anglo to settle in the area was Dr. Isaac Smith, who brought his wife and seven children to the rancho to live in 1853, and built a house known as Smith’s Station. The following year, Banning’s first permanent landmark, the Gilman Ranch adobe, was built and ultimately used as a stage stop by the Colorado Stage & Express Line on its route to the Colorado River, where gold had been discovered. The city was named in honor of General Phineas T. Banning, an American businessman, financier, and entrepreneur who operated a freighting business and a stage coach line between the city and Yuma, Arizona. The railroad replaced the stagecoach in 1876, but Banning is still known as “Stagecoach Town USA,” and is famous for its annual Stagecoach Days Celebration featuring a parade, carnival, and rodeo. The city officially incorporated in 1913. 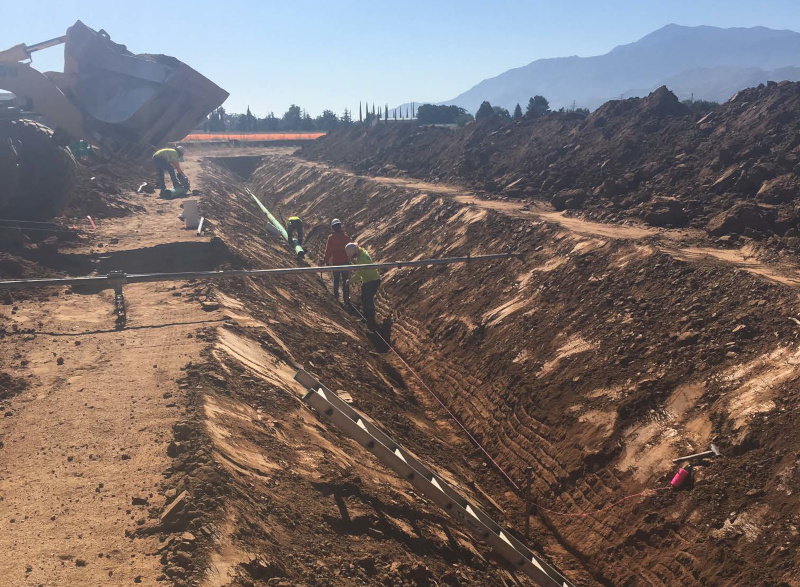 The first sewer pipe being laid in Atwell.

Today, Banning has a population of approximately 32,000, and according to City Manager, Doug Schulze, the community has been in “a tough situation for the last couple of decades.” It seems that, at one time, Banning was a getaway location for the Hollywood elite, but, today, the city is a low-income community, with a median household income of only $30,000, which is comparatively low for a California city. “Interstate 10 came through in the 1950s; Palm Springs developed and Banning became a car stop. A lot of the local businesses that were thriving dried up,” Schulze explains.

However, change is definitely on the way in Banning. The city has approved approximately a million-and-a-half square feet of new commercial space over the last year-and-a-half, and some existing businesses are expanding. “So the outlook is very positive,” Schulze avers.

Another major aspect of Banning’s impending renaissance includes two major home construction projects that are slated to bring approximately 8,000 new homes to the city. “There’s going to be a significant change in population – roughly doubling it and changing the demographics considerably,” says Schulze. “With 30,000 new people coming into the community, that’s going to draw the attention of all kinds of businesses and other builders that are going to want to take advantage of the opportunities here. So these two new developments are going to initiate a transformation of the city.”

The first project is a master-planned community called Atwell in Riverside County. Up to 4,862 single and multiple-family homes, across approximately 40 neighborhoods and spanning 1,528 acres, are being developed by Pardee Homes. Phase One of the development consists of 480 home sites, two commercial retail pads, and one K-6 school site. Model homes are anticipated to open in January 2020, with first occupancies scheduled for May 2020. The rest of the community will be phased in over the next 10-15 years. The second project is called Rancho San Gorgonio. It’s another master-planned community being built on 831 acres in Riverside County that are expected to be annexed by the City of Banning. Plans include 3,385 dwelling units, 188.5 acres of parks and trails, and a 10-acre neighborhood commercial center.

“With developments this large, development agreements are typical,” Schulze notes. “And those agreements address the types of mitigation that will be required of the developer. In this case, we’ve negotiated parks, public safety facilities, schools, commercial centers, community centers, water, sewer, and electric infrastructure, etc. In California, it’s not uncommon to have these development agreements, and cities have the ability to sell public facility bonds, which are used to fund the improvements; those bonds are paid back over time with assessments charged to the individual properties once they sell.”

In addition, both new developments will have to meet the Net Zero requirements of the State of California, which mandate that any new residential buildings constructed in 2020 and beyond must generate enough onsite energy to offset their energy use on an annual basis. This usually means that all single- and low-rise multi-family homes will have rooftop solar panels installed in order to achieve zero-net electricity status.

Regarding the city’s own electricity generation, Schulze reports that Banning is already in compliance with California’s Renewable Portfolio Standard (RPS), which requires municipalities to secure 50 percent of their power from RPS-certified facilities by 2030. “Banning’s electric utility has already exceeded the 2030 requirement because we have about 70 percent of our portfolio currently procured from RPS-certified facilities,” he states. “So, we’re way ahead of the game, and we’re doing that with rates that are much less than about 85 percent of the rates paid in California.” That’s because Banning Electric Utility, a municipal, retail electrical energy distribution utility with six distribution substations and 134 miles of power lines, serving nearly 13,500 residential and business accounts, is a member of the Southern California Public Power Authority (SCPPA), and, as such, enjoys the benefits of joint action through cost-effective planning, construction, management, and operations of electrical energy resources.

Furthermore, Schulze reveals that the city is in the middle of negotiations for a public/private partnership with a company that is planning a 500-megawatt, solar photo-voltaic and battery storage project, that, if successful, will allow Banning to create 100 percent of its electricity via renewable energy. “With the partnership, it doesn’t just mean we’re buying renewable energy – we’re actually going to become a producer,” he exclaims. “With all the wild fires California has had, we’re experiencing public safety power shutoffs, and those PSPSs are being implemented by the large public utilities in response to high winds and dry conditions. With our electric utility, right now, being a consumer, we’re pulling energy into the city off transmission lines from Southern California Edison. With this new project, we won’t need to bring energy in off the transmission lines; electricity will be locally generated and going right into our substations in the city. And because this is a 500-megawatt system, we’re looking at generating about ten times the actual demand needed in the City of Banning, meaning we’ll have 425-450 megawatts of 100 percent renewable energy to wheel back to the market. And that’s the piece that’s going to change the dynamics for the city’s budget, because selling that much energy is quite lucrative.” 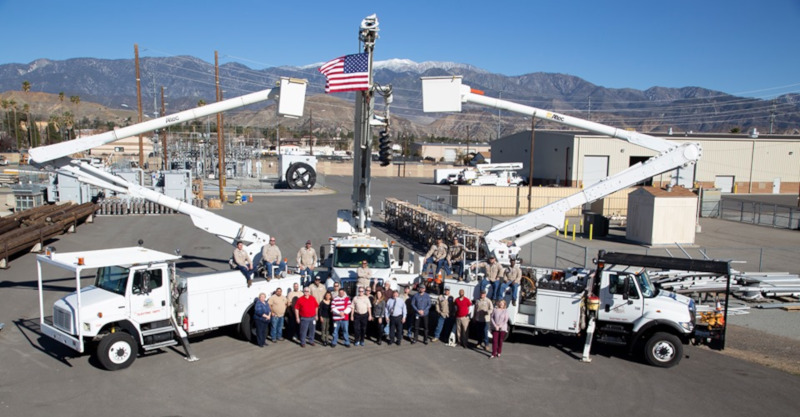 “Along with that project, we are looking at a complete transition of our transit fleet from compressed natural gas to 100-percent electric, while adding approximately 1,000 electric vehicle charging stations,” Schulze continues. “We have about 275,000-plus cars a day on I-10 that runs through the city, and we’re situated at a point either from San Diego or from Los Angeles where we’re a perfect stop for a recharge for most electric vehicles of today. So, we figure we can take advantage of that by bringing people into the community to recharge their vehicle and doing some shopping downtown while they’re here.”

Speaking of downtown, Schulze says that Banning is intent on creating a walkable, livable downtown area. “A lot of the ordinances are in place to allow that,” he shares. “The city has started to make the public improvements that are required, creating spaces that people want to be in. We’ve been dealing with a homeless problem in our downtown, lately, and we feel that bringing more people into the downtown makes it less attractive for some of the current activity that we’re experiencing in our downtown that’s negative in nature.”

Other “green” projects that Banning has instituted to save both money and energy include the conversion of roughly 90 percent of its street lights to LED. “That was a cost recovery, or ROI, of roughly three years,” Schulze says, “and a reduction of our energy costs for our street lights of about 75 percent.”

In addition, Banning has implemented Automatic Meter Reading (AMR) and Advanced Metering Infrastructure (AMI) for both its water and electric utilities. “We’ve got about 95 percent of the electric meters deployed, and the water meters, we’re deploying over a two-year period,” says Schulze. “We’re using a local company called Zenner USA. They provide water meters for cities all across the world. With the AMR/AMI program, we’ll be able to be more accurate with our billing, and we’ll reduce our labor costs for meter reading. Data collection for decisions relating to load, infrastructure, and customer usage will be readily available. And we’ll be able to help customers with high usage understand what might be causing the high usage – whether it’s a water leak or some kind of appliance that is not working properly. So, we’re pretty excited about that.” It has cost the city $1.6 million to purchase the automatic metering infrastructure, water meters, communications equipment, and software and hardware from Zenner, and roughly $2.5 million for Banning’s electric utility to convert some 12,000 electric meters in the city to the new technology.

Schulze believes that Banning’s tough times are over and that the city is poised for a new beginning, ready to welcome new businesses and residents as a friendly and wholesome place to work and raise a family. “With the changes we’re making,” he declares, “people have become very optimistic and hopeful for the future.”

WHERE: In the San Gorgonio Pass, Riverside County, California

The Zenner/Minol group is the largest Water and Gas meter producer in the world with offices and affiliates in 100 countries and manufacturing plants on 5 continents manufacturing its products to ISO9001, ISO14001 and ISO18001 certification standards. For the United States the manufacturing plant is in Banning, California. Established in 1903, with 8200 employees globally, Zenner focuses solely on water and gas industry innovation.

Zenner produces every kind of metering technology needed by our customer base.

Zenner deploys AMI systems Globally using various technologies that benefit and fit the local environment providing optimum cost and performance. With more than 25 million active endpoints globally Zenner has become one of the largest deployers of AMI technology in the world.

Water is a precious resource, facing critical challenges in many areas of the country and world. The City of Banning California has been progressive in looking at technologies that would preserve the cities water assets and lower their operating costs. City of Banning selected Zenner metering and AMI (automatic meter integration) to deploy across their city as it provided the latest innovations in metering and meter reading technology available.

The Stealth Mesh system selected is the newest technology available and is land based versus tower based providing greater reliability and system flexibility.

SUEZ North America operates across all 50 states and Canada with 2,825 employees dedicated to environmental sustainability and sustainable resource management. The company provides drinking water, wastewater and waste collection service to 6.6 million people every day; treats over 560 million gallons of water and over 450 million gallons of wastewater each day; delivers water treatment and advanced network solutions to 16,000 sites; processes 160,000 tons of waste for recycling; rehabilitates and maintains water assets for more than 4,000 municipal and industrial customers; and manages $4.1 billion in total assets. The company posted revenues of $1.1 billion in 2018.