In 1977, the Credit Union constructed its first free-standing branch in Jacksonville, and then opened a second branch in 1988. In 1991, it merged with Gulf Life Employees Federal Credit Union. This merger allowed insurance company professionals to join, and, it opened two more branches in Baymeadows and Orange Park. In 1999, the Credit Union obtained a community charter. This opened membership to anyone who lived, worked, or worshipped in five northeast Florida counties – Duval, St. Johns, Clay, Nassau, and Baker. In 2006, eligibility extended to those who lived, worked, or attended school in six additional adjacent counties – Alachua, Bradford, Columbia, Flagler, Putnam, and Union. In 2010, the credit union changed its name to 121 Financial Credit Union, based on the theme that it offered one-to-one service to its members.

Perhaps most importantly, 121 Financial has become recognized as the area’s premier small business lender. “Those businesses typically have annual revenues of less than $5 million,” Marovich explains. “We started the department in 2007, and over the years it’s grown considerably. In fact, we have received numerous awards from the SBA (the federal government’s Small Business Administration) – twice for best Small Business Financial Advocate, twice for Credit Union of the Year, and five times we received the First Mortgage Lender of the Year award.” During the recent COVID-19 pandemic, the Credit Union processed approximately $29 million in paycheck protection loans as part of the SBA’s Paycheck Protection Program. “It was just shy of 500 loans, saving about 4,800 jobs in the northeast Florida communities,” Marovich notes.

In what is understood to be a particularly competitive marketplace, COO Paul Blackstone believes that 121’s size gives it the flexibility to be able to move both quickly and dynamically. “We spent a lot of time working on our digital platform, which we continue to evolve and improve,” he states. “One thing we’ve learned in relation to COVID is the importance of making services accessible via digital platforms. This means adding things like video teller machines, which allows us to provide the same level of high-touch service, as well as, a high level of safety for our employees and members. While we want to see our members in person, the reality is the better we can serve them and make it more seamless for them digitally, the better off they’re going to be. And what we’ve seen from that thus-far is increased membership growth as opposed to a fall-off, which we would have expected during a pandemic.”

Currently, all of 121 Financial’s lobby branches are open by appointment only. Additionally, 90 percent of its back office staff were moved to working remotely within two weeks of Florida’s lockdown orders. “We typically have 90-95 people working in our corporate headquarters and we got that down to about five people within that time period,” Marovich reports. “The other thing that helped us was the video teller machines – that has done quite well for us and, at this point, we are the only credit union in Jacksonville that has them in operation. You can use it as an ATM, or you can push a button and speak to a live representative who works in our contact center and they will walk you through a transaction. These have really helped us transition some of our membership quiet seamlessly.”

Regarding remote work, Marovich thinks that even after the pandemic passes, 121 Financial may not necessarily revert to doing business the way it was done in the past. “In our headquarters, we have considered doing a Team A and a Team B rotation, so that we still have that cultural connection. We want to continue to stay connected to our teams, but I believe that we will continue to have a larger segment of remote employees,” he muses. “I have to admit, I was a little skeptical, at first, when we were in the planning phase. But I will tell you that productivity from a lot of those employees has increased with them being remote. Better yet, our members haven’t seen a decrease in the level of service; if anything, it’s increased. We pay a third party to conduct net promoter score surveys for all of our branches and contact center – those numbers went up during the pandemic. So, I would guess that we will see a great change going forward.”

Another switch going forward, according to Marovich, will be a credit and debit card conversion process. “We’re going to move to contactless cards, having seen through the pandemic how huge the increase was in the usage of those cards,” he explains. “And we’re also going to offer our members more digital options with their cards.”

Blackstone elaborates: “You’re going to see a lot more refinement of our digital offerings, driving consistency in the experience between different products and services with a more common feel and theme, making it easier to get things done. I think you’re also going to see an additional expansion in our LTMs (Live Teller Machines) because the reality is, we have to continue to service our members regardless of where they are. Notarizing documents is the only thing we don’t do on an LTM currently – we can open accounts, start loan processes, etc. It’s safe for the member and safe for us. So, we’re going to get a broader expansion out to some of the other additional counties that we’re chartered for.”

While 121 Financial continues to concentrate on digital refinement and reaching out to more members, it is concurrently looking to see how it can generate additional revenue so that it can grow organically, as opposed to focusing on mergers or acquisitions. “At the moment, our loan volume is down, as are other sources of income.” Blackstone shares. “So, it’s critical for all credit unions to focus on new ways to generate income so they can offer the same services to their members without increasing the costs or decreasing the value.”

Collaborating in CUSOs allows credit unions to capitalize on these outcomes and provide improved member services. It gives them the ability to provide better service, cheaper service, and new services that credit unions may not be able to provide. For example, not all credit unions have the capital to gain the expertise to originate business and commercial real estate loans. But if several credit unions pool their resources, they can afford to hire the right individuals and in turn provide a valuable service to their members.

“When CUSOs began they were generally insurance companies, title insurance, or investment services – now you’re starting to see a lot of other CUSO services, which benefit both our membership and our industry,” says Marovich. Blackstone reports, “We built two companies that provide services for our peers – one is a cybersecurity company that we’ve been working on for the past two years and is getting ready to launch, the other one is a CUSO that deals with distressed assets as they relate to credit unions – repos and those sorts of things. The value is, we’re providing a higher level of service to build revenue for ourselves and easing the burden for other credit unions that participate.”

“With interest rates as low as they are, the margins are compressed so you have to look for other ways to generate income,” Marovich adds. “So, it’s becoming more and more of a trend.” 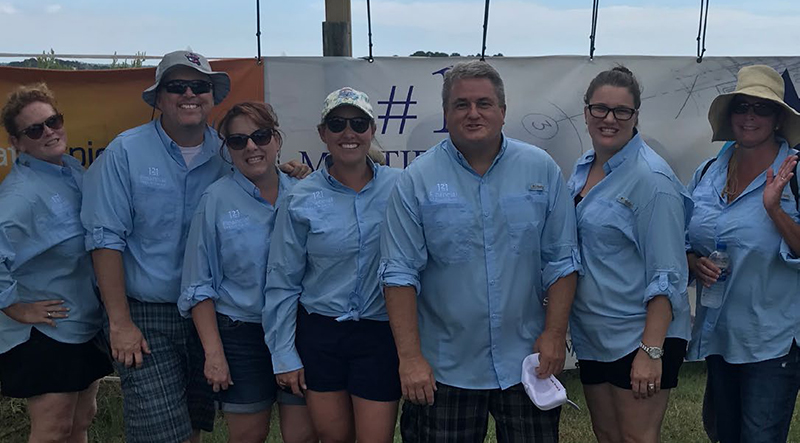 Marovich stresses that 121 Financial is also committed to strengthening the broader community of Jacksonville by supporting local organizations, charities, and events that best reflect the values of its members and its community. It selects donation and sponsorship opportunities where it can make an impact in the community, while promoting the health and well-being of those in need. Two local recipients have been the Gabriel House of Care, which provides affordable lodging for cancer and organ transplant patients, and the Florida Small Business Development Center at the University of North Florida, which offers business relief services. And in 2019, 121 Financial introduced its Giving Circle Campaign, wherein employees nominate non-profit organizations and charities for recognition and financial awards.

Finally, this past year, the 121 Financial Credit Union obtained the naming rights for the 121 Financial Ball Park, which is the home field of the Jacksonville Jumbo Shrimp, a major league, AA team affiliated with the Florida Marlins.

WHAT: A member-owned credit union

Bank of Romney – You’re Someone Special...