The city that’s making it happen

In the historic Mohawk Valley of upstate New York, midway between Buffalo and New York City, sits the welcoming community of Utica, whose building blocks are the bonds of diversity that shape its identity. Incorporated as a village in 1798, the name “Utica” was originally chosen from a collection of names placed in a hat. These days, however, the city is much more intentional in its direction, having pulled itself back from the brink of bankruptcy in 2012, and turned a corner thanks to some creative placemaking, new economic development opportunities, and strategic steps to revitalizing its downtown corridor.

As a former textile-industrial town, Utica benefited hugely from the Erie Canal’s construction – much like Syracuse and Rochester. By 1845, the city was leading New York in the processing of southern cotton and knitted goods, having swelled to a population of 20,000, which was more than the populations of Chicago, Detroit, or Cleveland at the time. Utica, like so many other Rust Belt cities, faced a massive economic downturn in the mid-20th century due to offshoring and the decline of its once-booming textile sector. But, through it all, the city has made the most of a low cost of living, attracting immigrants and refugees from around the world. At the present, Utica is working to further embrace the concept of being a “host community,” to encourage growth for its cultural institutions and its expanding opportunities for commerce.

“The city has been a melting pot for well over a century,” reports Mayor Robert Palmieri. “Going back many years ago, the Italians, the Poles, the Germans, the Jews – all ethnic groups, really, migrated here and formulated Utica as their home. And each pocket of the city assumed its own neighborhood: the West Side was more of a German and Polish community; the East Side was predominantly Italian; the South Side was more Jewish and African American; and North Utica – one of the undeveloped areas going back over 100 years – really melted into all of it. That was the beginning of Utica as a modern industrialized city, and we’ve continued to be a city which is known as a welcoming community because of our history.” 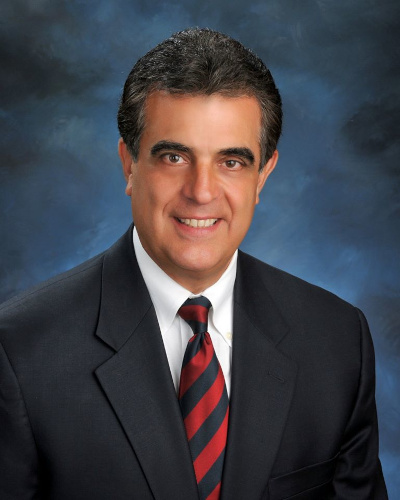 Utica’s population has remained ethnically diverse, receiving many new influxes of immigrants and refugees since the 1990s. The estimated 4500 Bosnians that came to Utica after the Balkan conflict have transformed the look of the city, rehabilitating hundreds of vacant and abandoned homes in the Corn Hill and East Utica neighborhoods. “The second wave of immigration consisted of the Bosnians, the Burmese, and the Russians, which really manifested in changes to a lot of the older housing,” Palmieri confirms. “We’re known by our immigrant population as a very warm and giving place. We have an affinity for getting people from all over the world to come here and really feel that this is their home.”

Today, more than 42 languages are spoken in Utica’s schools, with Italian Americans making up a significant portion of the population.

Since Palmieri was elected in 2011, the city’s finances have essentially been stabilized, owing to a $28 million increase in the tax base and an upgrade by all three bond rating agencies. “We have economic development,” the Mayor says. “We went from a negative $15,000 in our fund balance to a record of $8.2 million. Through the eye of the beholder, we’re looked upon as the city that’s making it happen.”

Although the city is landlocked, Palmieri says that developers from within the state and beyond are choosing to invest in Utica because of what lies at the core of its people. “Utica gives you that warm feeling when you’re here,” Palmieri says. “We could be considered the best little city in America. We’ve got all the amenities of a larger municipality, while maintaining that community feel that a larger city can’t give you.”

Along with a great local educational system, which includes Utica College, Mohawk Valley Community College, Hamilton College, and SUNY Polytechnic, Utica boasts a vibrant arts community anchored largely by the Munson-Williams-Proctor Arts Institute – an internationally recognized fine arts center with over 13,500 pieces in its permanent collection. “The museum is located on Genesee Street, our main street downtown, in a building designed by famed architect, Philip Johnson,” shares Commissioner of Urban & Economic Development Brian Thomas. “We’re looking to build on the Institute’s dynamic community and make it an even greater part of downtown Utica as we move forward.”

To that end, the city is collaborating with Minneapolis-based non-profit Artspace Projects on the new construction of Artspace Utica. A four-story building located at the intersection of the Commercial Arts & Cultural Districts in downtown Utica, the project will address critical affordable housing and economic development opportunities for the creative workforce, with 40 live/work units for local artists and their families on the upper floors, and 1,500 square feet of community/commercial space at ground level.

Palmieri says the estimated $12.5 million development project falls in line with his commitment to resurrect the city. “The downtown used to be stagnant,” the Mayor admits. “When I took office in 2012, one of the first things we did was go to Albany and consult with Comptroller Tom DiNapoli. He told me we were ready for a Control Board. As we all know, a Control Board takes authority out of the hands of local politicians. That’s not what we’ve done. We sat together – Brian, the police chiefs and engineers, the whole staff – and we mapped out a game plan.”

Using his background in sales and marketing to “sell the city heavily,” Palmieri’s administration cut the city’s expenditures by 20%. He notes, “We sold off 13 city-owned commercial buildings, put them back on the tax rolls, and invested millions of dollars with the help of the Governor’s office. When you look at Utica now, we’ve become one of the marquee cities within New York State. We’ve climbed out of the doldrums of a very poor financial situation to experience a real resurgence.”

In May of this year, former Governor Andrew Cuomo announced 16 transformational plans for Utica as part of a $10 million Downtown Revitalization Initiative (DRI) grant. With this award, the city will advance projects that redevelop underutilized and historically significant buildings, including a $750,000 restoration of the Kempf Building into a mixed-use property, and a $600,000 rehabilitation of the historic Macartovin Building to attract businesses to the city’s commercial corridor. “We’ve been very successful with that DRI win,” Palmieri says. “Leveraging that, on top of the Department of Transportation’s $100 million infusion for the north-south arterial reconstruction, and the input from the entrepreneurs in those buildings, has rolled over $80 million in investments into our downtown areas.” 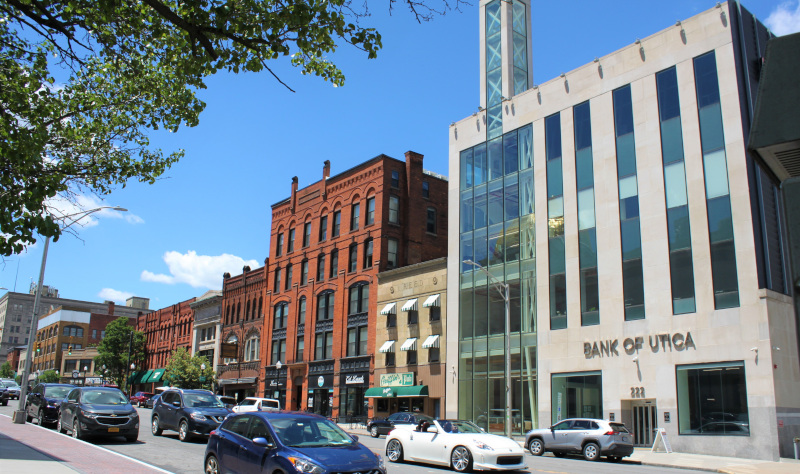 Utica is also the inheritor of one of the largest parks systems in the state. Sports and recreation opportunities abound in T.R. Proctor Park, which includes athletic fields, the Buckley Pool and Bathhouses, and the Starch Factory Creek and Trails, while the F.T. Proctor Park serves as the 62-acre crown jewel of the city’s park amenities. “Through a joint venture with Cal Ripken’s Foundation and the CEO of Northern Safety, Sal Longo, we’ve just added a state-of-the-art soccer and football field at T.R. Proctor,” the Mayor announces. “It’s a $2.5 million facility and the first of its kind in Utica. We’re extremely proud to be able to add it to one of our signature parks.” Adding to the cachet of Utica’s green spaces is the fact that the entire park system was designed by famed landscape architect, Frederick Law Olmstead Jr.

A plan is also coming together for another of the city’s natural attractions, Harbor Point, which comprises over 100 acres of waterfront real estate uniquely situated around the city’s historic harbor, between the Mohawk River and Erie Canal. “Harbor Point is an area that’s been talked about for 60 or 70 years,” Palmieri says. “A number of Mayors have worked on it and they’ve done a great job. Our goal is ultimately to turn it into a destination, with the impact to take people off the New York State Thruway. We’re envisioning some sports facilities along with a waterpark, some eateries, and condos with views of the historic Erie Canal.”

The redevelopment of Utica’s inner harbor comes at the perfect time according to Thomas. “The area was once home to the largest coal gasification plant in North America,” he explains. “With the designation on environmental issues, we’re at the tail-end of nearly $100 million spent in terms of remediating that area. So, our planning and our efforts to come in and redevelop Harbor Point as a destination for residents and visitors are opportune.”

“We’re at the cusp of transforming this city into one that’s looked upon, by the entire country, as a city with all oars in the water,” the Mayor asserts. “We’re moving forward together, and it’s definitely in the right direction.”

Where: In the historic Mohawk Valley of upstate New York

Upstate Cerebral Palsy is a 501 (c)(3) nonprofit that provides innovative services and supports for individuals with differing abilities while creating exceptional opportunities to fulfill life choices. Founded over a half-century ago, several parents and grandparents were searching for programs and services to provide for their children living with cerebral palsy.

In September of 1950, the first clinic officially opened its doors in Kernan School located in Utica, NY. At that time, five staff members provided a combination of therapeutic and educational services to seven children. Since then, Upstate Cerebral Palsy has grown to serve approximately 8,500 individuals with intellectual and developmental disabilities as well as individuals with mental and behavioral health needs in over 70 locations.

Our journey continues as we work to empower people through exceptional opportunities so they can live more independent and meaningful lives.

The MMRI was founded by the Grand Lodge of Masons of the State of New York to help the lives of all humankind. Our researchers stand at the forefront of discovery for novel therapeutics and hopefully, cures. We’re unlocking the possibilities, one experiment at a time.

Central Association for the Blind and Visually Impaired – www.cabvi.org