Business View Magazine interviews Jon Krawczyk of Superior Pools, as part of our focus on best practices in the American recreation industry.

Tragedy, as bitter as it comes, can sometimes be the catalyst that opens a door to an opportunity that changes a young life. Growing up in Michigan, washing cars on his father’s lot, all that Jon Krawczyk knew was that he wanted nothing to do with the family business, long-term. “In 2000, my father wanted out of the car business,” Krawczyk recalls. “He moved down to Sarasota, FL and trained with his buddy, Doug Kennedy, who owned Elite Weiler Pools. Dad learned the ropes, and together with Doug’s son, John, the three of them started a company called Superior Pools.”

“Back then, my dad was in his late forties,” Krawczyk continues. “He wasn’t interested in starting all over; he was just trying to make a living. He was only aiming to do 50 pools. Well, we’re from the Midwest, and the Midwest mindset is this—your work means everything, you do what you say, and it’s pretty easy living. That first year, he did 150 pools just by calling people back and showing up. And from there, he grew. The next year, he did 300 pools. The year after that, 500 pools. He was rocking and rolling doing 500 pools a year, but he needed some help.” 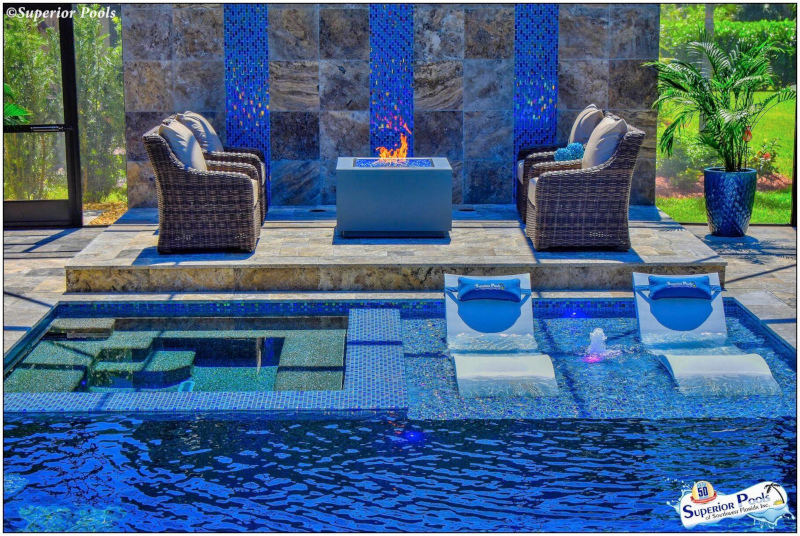 “In 2005, he opened a location in Fort Myers, FL which my uncle Mike and my aunt Dee run,” Krawczyk says. “I was still in Michigan earning my Business and Sports Marketing Management degrees from Northwood University, but in the summertime, I’d come down to Florida and my father would put me to work in the pools. I was glad I was going to college because I couldn’t see myself doing that forever. I graduated in 2004 and accepted a couple of internships, but nothing really panned out. That’s when my dad dangled the carrot and said, ‘If you move down, help me run the place, I’ll set up a mortgage in your name.’ For the first five years, he threw me in the hole. I hated him for it then, but without that experience I wouldn’t be where I’m at, wouldn’t know what I’m doing, wouldn’t have the respect that I do for the people who do this work.”

Today, Krawczyk is practically the sole owner of Superior Pools of Southwest Florida Inc., fan-voted the #1 Pool in the World by APSP the last three years running and achieving the 2019 Top 50 Builder in the U.S. award from Pool and Spa News (and, out of the top 50, ranking No. 1 in customer service). With 50 employees staffing two locations (Port Charlotte, Fort Myers) and over $25 million in sales last year, he’s been leading Superior Pools with an unfaltering commitment to quality, service, and continuous improvement.

In the beginning, Krawczyk mostly did grunt work for the pool company. Eventually, he was promoted to construction manager. When the 2008 recession hit, he demonstrated his business savvy by encouraging his father to make pool service and remodels the focal point of the enterprise.

Sadly, in 2011, Krawczyk’s mother passed away. She’d been diagnosed with melanoma just two months prior. “That was a hard time in all our lives,” Krawczyk says. “My parents had worked together, basically, their whole marriage. He built pools, she worked in sales. Their offices were next to each other. After she passed, my father moved back to Michigan and threw me into it. I’m a true believer in everything happening for a reason. I miss my mom dearly, but without that happening, my dad would still be running the place.”

“When I took over from him, all we did was new construction holes,” Krawczyk continues. “We did all builders. The Recession came and everyone was shutting their doors. We had to change some things, so I started a pool service. In 2012, we started doing remodels. Remodels has been a big business and it keeps growing.” As of 2013, 100 percent of their work is for homeowner pools. “We have no builders anymore,” confirms Krawczyk.

It was around that time that Superior Pools experienced the paradox of slowing down to go farther. Krawczyk’s goal in slowing down wasn’t really to work slower; it was more about optimizing the effectiveness of his approach. “I’d rather do quality over quantity,” he explains. “Now we average around 250 pools annually. Everyone thinks a pool is a pool. That a pool is made from a mold and they’re all the same price, made the same way. That’s the attitude we always run into. One of the main things that sets us apart is we don’t give out quotes. Customers come in to see us first. If you’re interested in a pool, you drive to one of our offices. What we do is teach you about the pool. We don’t sell you anything, we teach you. At the end of the day, our clients need to understand our process so they can understand the value we bring. With a big transaction like a pool, face-to-face is the best.” 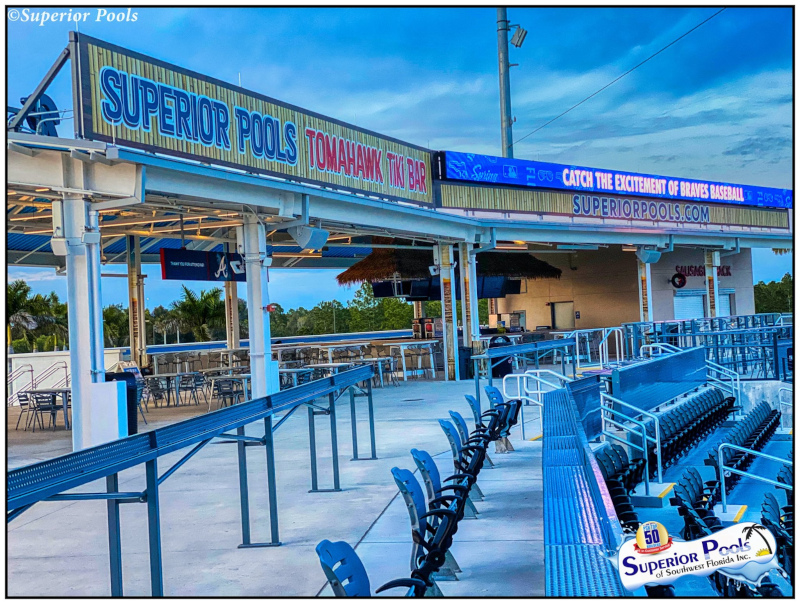 At Superior Pools, the design process is intimately weaved into the fabric of the business. The result is a team of in-house designers — four at the Port Charlotte location, two in Fort Myers—with the freedom to flex their skills and make a tangible difference for their pool remodel clients. The company also has the shortest lead times to build pools in the industry – a distinction which they achieve by staffing a crew of 50 in-house employees.

While the current industry average lead-time is anywhere between 4 to 6 months, Krawczyk says, “We average around 30 to 40 days from start to finish—from digging the pool to watering the pool. There’s not another company in this area that can do that. It costs more money to have more employees, but you get the quality product in return. Lots of pool builders use up to 70 percent subcontractors, but subcontractors are there to get paid. They don’t care about your pool. And when there’s an issue, they don’t go back to fix it. That’s on their time. Having in-house employees is a huge deal for us. We do around 90 percent of the work, in-house. The only things we don’t do are concrete, the cage, and the electric. Everything else, we control. It’s not a race to finish the pool, but I’ve been doing the scheduling since 2007 and it’s just like clockwork for me.”

As a business owner, Krawczyk has never waited for change; he’s always created it. Finding interesting ways of reaching his customer base has been both a natural and fundamental part of his journey with Superior Pools. “We started a TV show called ‘Home Sweet Home by Superior Pools’,” he relates. “It’s going on Season 4. We interview customers that we’ve built pools for, go through the building process, and get their testimonies. Last year, I saw a lot of feedback. People were coming into our offices and saying, ‘We watched your show!’ When customers see our work and they validate it, that’s a big thing. They watch the show, get a better idea of what we do, and we gain legitimacy from it.”

It’s the same kind of forward thinking that inspired Krawczyk to leverage baseball’s popularity to drive business growth. Last year, the company secured the rights to a ticket window at CoolToday Park, the new spring Home of the Atlanta Braves. “We’ve signed a couple of big deals with them,” shares Krawczyk. “The ticket window is called the Superior Pools Will Call, which is on the outside of the stadium. I’ve made that advertising deal a lot bigger this year. CoolToday Park has a tiki bar, and it’s open 365 days a year. I’ve got name rights to it, so it’s called Superior Pools Tomahawk Tiki Bar. That’s the big one. They’ll have our t-shirts, pens, coasters. There’s going to be lots of promotions. We’ll get a lot of exposure off that. I do all the marketing and web content. That’s what I love to do, and I see a massive opportunity there.”

Changes aside, Superior Pools remains, at its core, the same family-owned and family-oriented business Krawcyzk’s father started almost 20 years ago. “We even treat customers like family,” says Krawcyzk. “A pool is a big deal. We always tell people: ‘Do the research. Go out there and get some quotes.’ If they find apples to apples and it’s cheaper, we’ll encourage them to go there. But that doesn’t usually happen. We care about our customers and I treat every pool as my own. That’s a lifelong purchase you’re buying from us and a big investment you’re committing to. Despite the accolades, our pools aren’t really the #1 pool in the world. There are a lot of nicer pools out there. But the fans vote on it, and they’re saying we’re doing something right.”

WHAT: A luxury swimming pool builder

RJ Wachsman Homes – The pride of...