The New Braunfels Regional Airport – Capitalizing on the city’s growth

Capitalizing on the city’s growth

The New Braunfels Regional Airport is a public use airport in Guadalupe County, Texas. It is owned and operated by the City of New Braunfels and located four miles east of its central business district. Originally opened as the Clear Springs Auxiliary Field #5, when it was leased in 1940, the facility was used as a B-25 training base during World War II, before becoming surplus in 1944. After being reactivated during the Cold War as Clear Springs Air Force Base, the installation was transferred to the Army in 1956. It was then assigned to Randolph Air Force Base from 1964 until 1967, when it closed. It was turned over to the City of New Braunfels in 1969 and was known then as the New Braunfels Municipal Airport. 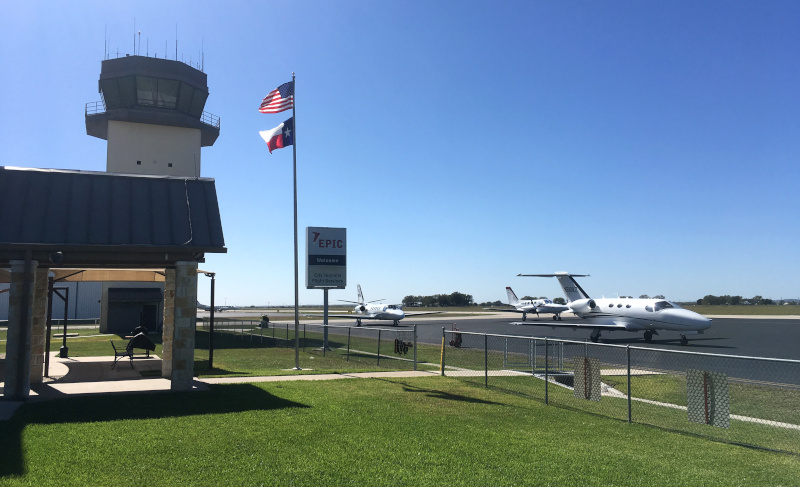 The New Braunfels Regional Airport covers an area of 1,200 acres and has two runways with asphalt surfaces: 13/31 is 6,503 by 100 feet, and 17/35 is 5,364 by 100 feet. The City of New Braunfels also owns and operates the airfield’s FBO, City Terminal Flight Services. Other Airport tenants include:

The Airport has nine employees, and according to Airport Director, Dr. Robert Lee, it is self-sufficient and runs “in the black.” It is home base to 146 GA aircraft, about 15 percent of which are corporately-owned, with a waiting list of 40-plus for hangar space. “At the moment, we don’t have any Airport owned hangar openings, and the Airport does not have plans to build any hangars,” Lee reports. “We just finished a taxi lane extension project; it’s 200 feet wide and we extended it to 400 feet, which allows for the addition of four more corporate hangars along that extension. So, if a corporate flight department is looking to relocate and be near San Antonio, New Braunfels can accommodate. And our service is the best.”

Currently, Lee says that he is focused on rehabilitating runway 17/35 and the east ramp and apron area. “We finished the master Plan update, which will take us out another 20 years,” he notes. “The Master Plan is calling for three phases based upon the current forecast. The first phase is to do infrastructure repairs and rehabilitation on the runway and the east apron. We are also reviewing proposals for engineering and design for a detention pond within the infield, which is going to help with stormwater runoff as we add new impervious cover to the south side of the airfield. With the taxi lane extension and potentially adding hangars, one of the concerns is where all the water goes.”

“I just put in a letter of interest with TXDOT (Texas Department of Transportation) Aviation to see if we can get funding to redo the east ramp,” he continues. “We’re looking at a $6-8 million project to redo the asphalt on that side of the Airport. Also, some of the property under our RPZs (Runway Protection Zones) is not owned by the Airport. The FAA, with their new guidelines, would prefer airport sponsors owning the property underneath the RPZs, so we’re in the process to see if there’s any grant funding available so we can acquire the remaining parcels that underlie the runway protection zones. In Phase Two of the Master Plan, which begins in year five, we’re looking at engineering, design, and construction of another extension to our primary runway to 7,500 feet. And in the process of extending it, we would also increase its weight bearing capacity.”

Regarding competition from nearby facilities, Lee says that the closest GA airport is San Marcos, about a ten minute flight from New Braunfels, with San Antonio International Airport about 30 miles to the southwest and Austin-Bergstrom International Airport some 45 miles to the northeast. “So, San Marcos could compete, but we’re the first airport in line from San Antonio, so we have an edge over San Marcos for San Antonio traffic, while Austin traffic can lean toward San Marcos. Also, we’re easy to get in and out of; we are Class Delta airspace from 7AM to 7PM (Class Delta airspace is the space that surrounds airports that have an operating air traffic control tower, but don’t have radar services. Class D airspace is generally cylindrical in form and normally extends from the surface to 2,500 feet above the ground). On the other hand, Amazon just built a huge facility outside San Marcos, so it can tap into cargo. We could do light cargo, but at the moment, we’re not in a position to go after that; we would need some new hangars. Now, if a private entity came in and built some hangars, then we could more than accommodate it.”

“But New Braunfels is the second-fastest growing city in America, and I think that gives us a competitive edge, just because of all the business moving to the area and the population growth,” Lee maintains. “New Braunfels is a great community with lots to do.” New Braunfels, which was founded in 1845 by German settlers, is overflowing with old-world heritage and small-town Texas charm. The city’s business community boasts a diverse base including distribution, manufacturing, data centers, health-care, and aviation-related industries.

And going forward, the New Braunfels Regional Airport should continue capitalizing on the city’s rapid growth. “In the last couple of years, we’ve cleared a half-million gallons in fuel,” says Lee, “and we’re looking, on average, at a five percent growth in fuel sales, year over year. And we’ve seen a 25 percent increase in flight operations in 2019, over 2018.”

WHO: The New Braunfels Regional Airport