Nantucket Regional Transit Authority (NRTA) – Welcome On Board THE WAVE!

Welcome On Board THE WAVE!

Idyllic Nantucket, Massachusetts – a favorite coastal destination for thousands of visitors every year to relax, to shop, to dine, and head to the beach. But with droves of people migrating to the island, traffic congestion was a nightmare. And, seriously, where to park? Back in the late1990s, people were asked to leave their cars at home and ride the bus as an alternative to driving, to reduce traffic backups and create parking opportunities. After 16 years of being known as The Shuttle, the Nantucket Regional Transit Authority (NRTA) rebranded its traditional fleet to create a new excitement around taking the bus, and now getting around the island is not only easy but fun!  Welcome On Board THE WAVE!

According to Paula Leary, NRTA Administrator, “The Transit Authority started operating service in 1995 with three buses and two routes, and there were a lot of people on the island that didn’t think this would work. But it did, and very well, and they wanted more and more. The big purpose of the NRTA was to reduce the amount of traffic and help increase downtown parking opportunities in the summertime. Up until recently, we were a summer seasonal service. Now, we’re up to nine routes and 13 buses in the heart of the summer and we’re servicing “coast to coast” – Surfside to Jetties and Madaket to Sconset. We cater to a lot of different demographics and provide service to meet the needs of the diverse community we serve. In the late ‘90s, there was a big push to not bring your car on the island. But up until then there were few alternatives So that was the start of the Transit Authority in Nantucket.”

The Nantucket Regional Transit Authority (NRTA) was created by Massachusetts General Laws Chapter 161B in 1993, although operations did not begin until 1995. Officially, the NRTA is a body politic and corporate and a political subdivision of the Commonwealth of Massachusetts. The affairs of the Authority are handled by the Administrator appointed by the Advisory Board. The NRTA began providing seasonal fixed route service in 1995 and year-round demand response service in 2001. Year-round service began in the spring of 2018. Currently, the NRTA owns 19 fixed route and four demand response vehicles. 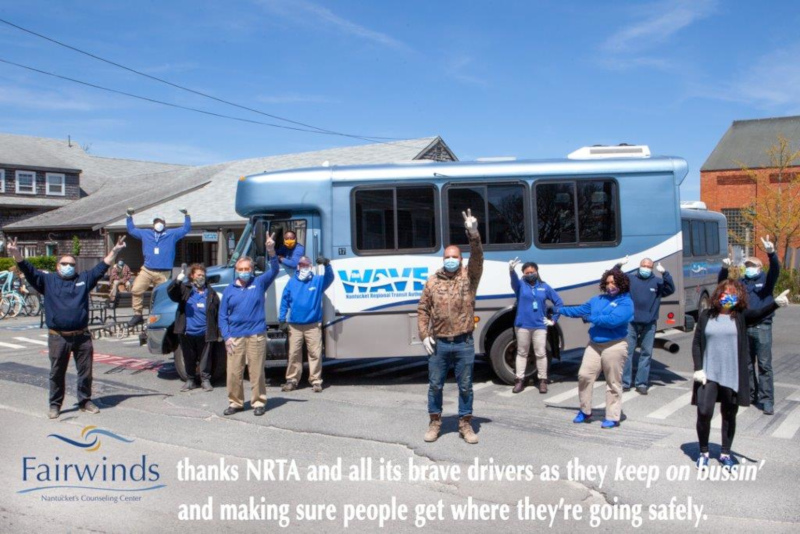 Funding sources for the NRTA include local assessment, state contract assistance, and federal operating assistance. Capital funding is provided through the Commonwealth of Massachusetts Department of Transportation RTACap Program, with an occasion input of capital funds from Federal Programs.  Additional sources of funding include, transportation revenues (fares, pass sales and brokerage services), and advertising.

According to Leary, “During the summer season, we carry almost 300,000 riders. With people not bringing their cars, we need to provide beach service and we need to service outlying areas of the island and get people to where they want to go. Our passengers are day-trippers, year-round residents, seasonal employees, elderly, disabled, people staying in guest houses, people with summer homes here, people renting homes – we have a large demographic we’re trying to serve and I think we do that very, very well.” The Nantucket island community has grown tremendously over the years, and NRTA has evolved with it, to now providing year-round bus service on three main routes. It began as an extension of the summer shoulder season in 2018 and continued running after Columbus Day that fall. People are very grateful for the service, especially the increasing number of transit-dependent fulltime residents.

As a quasi-public body politic of the Commonwealth of Massachusetts, the NRTA is its own entity, servicing the community of Nantucket. The administration is one arm of the Authority, and operations and management of the fixed route and demand response public transit services are contracted out to a private contractor, VTS of MA, Inc. They are in charge of hiring drivers, driver training requirements, drug and alcohol testing, day-to-day operations, and vehicle maintenance.

Both the operating company and the NRTA administration do a tremendous job with small staffs. Leary recalls, “The owner of VTS started out as a driver in 1996, so we’ve been together a long time. We would not be where we are without the dedication and commitment of the VTS team. We typically see a big turnover in drivers and we used to rely a lot on visa workers. But that became more complicated and costly every year, so they now do a lot of in-country recruiting – people from ski resorts that do the opposite of what we are in the summer. That’s worked out well, although we do always struggle with driver shortages and end up constantly training and licensing new recruits. But a few of my managers have been with me 10 to 20 years. Some started as bus drivers and worked their way up. And we’re very close, we have the same goals and objectives. They are very committed to the community and we all help each other.” 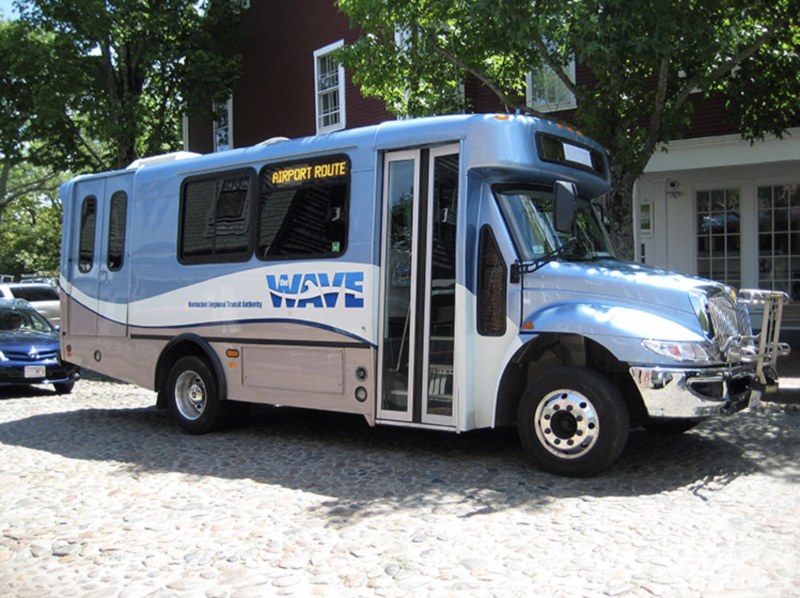 The administration staff consists solely of Leary, and one other employee whose main responsibility is the day-to-day operations of the elderly and disabled van service. Leary admits, “With the operating company, we all do what it takes behind the scenes so the public doesn’t notice they were up until two in the morning fixing buses. I’m very proud of that commitment. Certainly during Covid-19, the drivers were very dedicated to doing their job and serving the community – staying out there when everyone else was told to stay home, so we could transport the people who work in essential services. The community support in return was great to see, as well. It’s going to be a very different summer for us, for the island, and everywhere else, too.”

Nantucket is an enchanting, historic island with very narrow streets – an issue that dictates the bus size, particularly in the width and wheelbase. The NRTA runs 25 and 29 foot buses, along with nine-passenger vans for the elderly and disabled, and there are some roads that they will never be able to navigate. The vehicles are housed in the Authority’s facility at the “Nantucket-style” airport industrial park. It is a relatively new fleet, no more dirty diesel, and with the particulate filters and traps and modifications to engines to meet the EPA standards, THE WAVE vehicles are very clean burning.

Competition isn’t an issue for the NRTA. In a normal summer season – even with public transit, Uber, Lyft and taxis – there aren’t enough transportation options to serve the community, when the island sees up to 70,000 people on any given day. As for future innovation, Leary explains, “We’ve had mobile apps for close to 10 years, but we carry up to 3500 people a day, so certainly with fare collection we’ll have new technology coming around with phone apps for different types of payment methods. Rather than just cash on the bus. We listen to passenger feedback. People come here and ride our buses who would probably never take public transit at home. They tell friends, “There’s a cute little WAVE bus that drives us around the island, it’s always on time.” We like that they feel that way.”

ReMain Nantucket is a philanthropic group that works tirelessly at keeping the island’s downtown vibrant. They have done wonderful things for the community, and Leary sings their praises, “I’ve had over a decade long relationship with ReMain Nantucket and they viewed the bus service as a way to promote the downtown. They’ve been instrumental in that time – helping us fund the mobile app for the first year. They bought a piece of property downtown that they lease to us to run the buses out of and to have an Information Center there that we never had before. Plus, they cover all the associated costs for the Center.”

ReMain Nantucket has also done important projects that give riders dignity, such as providing shelters at the main stops, so people don’t have to stand in the wind and rain. In that regard, Leary credits Emeritus for designing “some really fantastic shelters for us. They’re very into energy savings, so the shelters are also solar lit. Working with our Historic District Commission, Emeritus did an amazing job designing those shelters with that quintessential Nantucket look.”

Nantucket is well known for its quaint, old-world ambience and the NRTA has done an incredible job fitting into the island’s character; taking those aspects into consideration as they design their routes. Leary has loved living on Nantucket since 1989 and is very proud of all the Authority has accomplished. She shares, “We rebranded as THE WAVE a few years ago through a community contest to get people excited about taking the bus and to give our public transit a nice identity. We do a phenomenal job being on time and safe and efficient and providing a good service, clean buses, friendly drivers. We take our drivers’ and passengers’ concerns and suggestions very seriously and we care about our customers. We want them to have a great experience, whether they’re visiting or living here all the time.”

Where: Island of Nantucket, Massachusetts

Drawing on many modes of architectural design, Emeritus implements progressive design concepts that balance our clients program requirements with contextual, site-specific details. At Emeritus, we realize the critical role of professional builders and the understanding of construction techniques. We distinguish ourselves as a design firm that recognizes the importance of builder and customer support to efficiently produce a high-quality project.

Let us help you identify project goals and execute design concepts through the construction process.