As the country struggles to regain some sense of normalcy in the midst of the COVID-19 pandemic, economists and manufacturers, alike, are looking to certain barometers to get some idea of what the economy might look like in the months ahead. Since consumer spending accounts for roughly 68 percent of America’s GDP, how consumers view their present and immediate future can give business leaders, at least a general indication on what and how much stuff they need to produce and market.

One significant guide is the Consumer Confidence Index (CCI), an economic indicator published by The Conference Board, an independent, non-profit, research organization that measures the degree of optimism on the state of the U.S. economy that consumers are expressing through their activities of saving and spending. Each month, The Conference Board surveys 5,000 U.S. households, asking five questions – two related to present economic conditions and three related to future expectations.

An indicator above 100 signals a boost in the consumers’ confidence towards the future economic situation, as a consequence of which, they are less prone to save, and more inclined to spend money on major purchases in the next 12 months. Values below 100 indicate a pessimistic attitude towards future developments in the economy, possibly resulting in a tendency to save more and consume less.

In March 2020, The Conference Board announced that the combined CCI had declined sharply to 120 from its February 2020 reading of 132.6. Both the Present Situation Index and the Expectations Index also fell, with the former posting a 167.7 for March 2020, vs. 169 in the prior month, while the latter cratered to a reading of 88.2 vs. the 108.1 posted in February 2020. This August, the CCI sank to a six-year nadir at 84.8, from a revised 91.7 in July. The decline in consumer confidence puts the index even below April’s reading of 85.7, during the height of the economic lockdown, suggesting that, at this moment in time, Americans are fairly pessimistic about the near future. Economists believe that persistently high joblessness, plus the expiration of the federal government’s $600 unemployment stipend, which ended in July, are contributing factors to the downward trend.

And yet, as the phrase once attributed to Mark Twain goes: “There are three kinds of lies – lies, damned lies, and statistics.” It’s the paradox of the pandemic that even though 12.9 million jobs have been lost and thousands of businesses have closed, the personal finances of many Americans have remained strong and, in some ways, even improved.

According to a new poll from the Associated Press-NORC Center for Public Affairs, 63 percent of the respondents describe their personal financial situation as good, largely in line with what it was before the pandemic began more than six months ago; 45 percent say they’re setting aside more money than usual (since February, there has been a $1.3 trillion jump in money kept in checking accounts – a 56 percent increase); and 26 percent are paying down debt faster than they were before COVID-19 hit.

So, the best one can say is that the current situation is fluid. Should the pandemic wind down soon, much of the money saved will likely be spent on consumer goods, as the citizenry’s pent-up needs and desires seek respite. Also pending are any more bills coming out of Congress, similar to the nearly $3 trillion in government aid in the form of direct payments, expanded jobless benefits, and forgivable payroll loans that helped cushion against the fastest economic downturn in American history.

All in all, our experience, here at Business View Magazine, leads us to be optimistic. Daily, we talk to business owners across the county who express confidence that the giant U.S. economy is still fundamentally strong and that consumers will soon be venturing out with money to spend. Yes, these are difficult times, but adversity always breeds creativity, which always leads to new beginnings. As the magazine of choice for businesses across the continent, we will continue to be here, as we have in the past, reporting on it all. 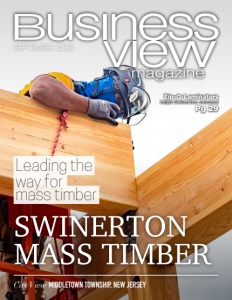