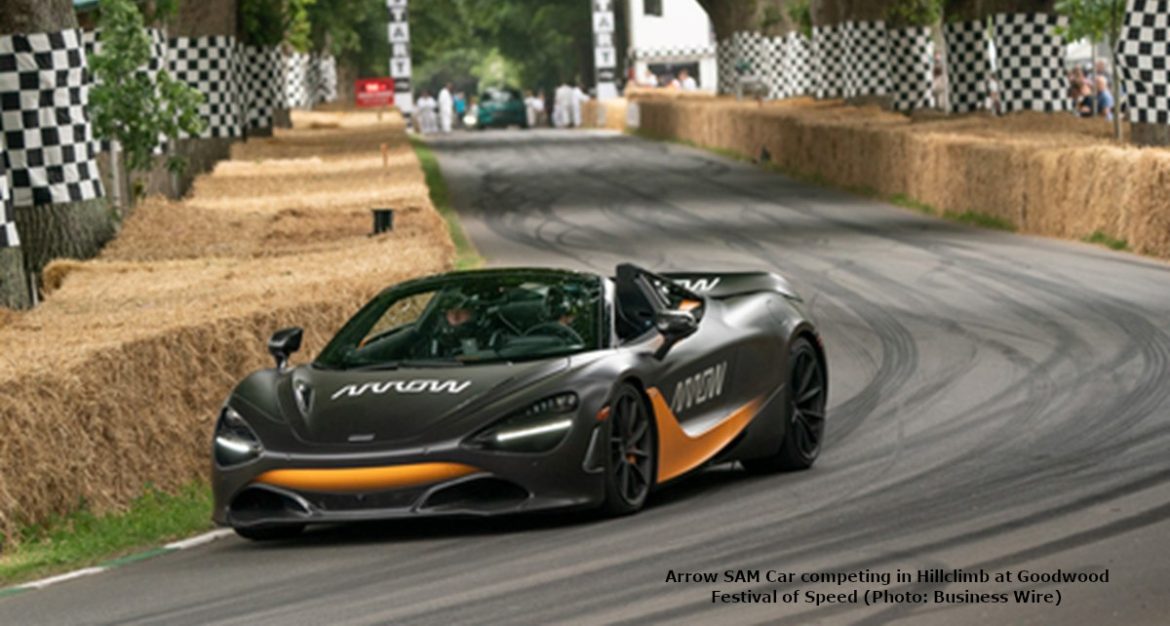 Schmidt and Arrow participated in this year’s Goodwood Festival of Speed with a 2021 McLaren 720S Spider sports car, which has been modified by Arrow, enabling Schmidt to drive the car with just his head. In addition, Arrow exhibited the Semi-Autonomous Mobility (SAM) Suit exoskeleton at the Festival of Speed’s Future Lab, and a prototype facial recognition steering system for the SAM Car that is in development and has been successfully tested at low speeds.

Schmidt is an IndyCar team co-owner (Arrow McLaren SP) and former Indy Racing League driver, who crashed during a practice lap at the Walt Disney World Speedway in Orlando in 2000, severely injuring his spinal cord. He was diagnosed a quadriplegic. To help Schmidt reclaim his independence and drive again, Arrow engineers created a smart, connected vehicle that he can operate safely and independently using head and mouth controls and voice commands – the Arrow SAM Car.

To steer, infrared cameras mounted on the dashboard detect Schmidt’s head motions – he looks left to steer the car left and right to steer right. To accelerate and brake Schmidt uses his breath, inhaling and exhaling through a ‘sip-and-puff’ device. Schmidt is a racing driver, once again.

Arrow designed another technology to improve Schmidt’s mobility – the Arrow SAM Suit. A collaboration between Arrow and robotic engineering researchers at Vanderbilt University (Nashville, Tenn.), the SAM Suit advances current exoskeleton technology with extensions to support Schmidt’s torso and arms, as well as his lower extremities. The SAM Suit is part of the technology approach used to develop the Arrow SAM Car, demonstrating how technology can provide freedom and choice to people with disabilities.

The Goodwood Festival of Speed, presented by Mastercard, is an annual motorsport event held in the grounds of Goodwood House in the South of England, and is organized by Charles Henry Gordon-Lennox, Duke of Richmond. The event has taken place since 1993 and combines current, historic and future elements of motorsports and motor racing.

FINALISTS Announced FOR $1 BILLION “BUILD BACK...