Easy in, easy out

Virginia Highlands Airport provides easy access to some of the most beautiful outdoor recreation areas in the eastern United States. Located in Abingdon, Virginia, the Airport is within minutes of the 7,850-acre South Holston Lake, a body of water that offers picturesque views of the western Appalachian Mountains. Much of that lake touches the Cherokee National Forest, a wilderness covering more than 650,000 acres. The southern tip of the George Washington and Jefferson National Forests, an expanse of about 1 million acres, is just to the north of the Airport, and nearby, the Appalachian Trail and Virginia Creeper Trail offer year-round adventure for hikers and bicyclists.

If the woods and water are not one’s speed, there is something a little faster just over the Tennessee border. “Bristol Motor Speedway is 20 miles down the road,” says Mickey Hines, Airport Manager. “So, our location is a big plus for us.” In addition, all within just minutes of Virginia Highlands Airport are world-class golf courses, plenty of first-class restaurants, and Broadway style theatre at the World Famous Barter Theatre.

The Airport also plays an important role in exposing the youth to aviation in Southwest Virginia. “We participate in the annual United Way Career Expo as a continued effort to introduce and educate the youth about the aviation industry,” Hines notes. “4,500 students over a two-day period from all over Southwest Virginia attend the Expo. The Airport provides information about Virginia Highlands Airport, possible career opportunities that await them, and additional resources to broaden their interest. Some even take a turn sitting behind the controls of a flight simulator and pilot their own flight.”

“In addition to the Expo, the Airport plays host to numerous school field trips throughout the year,” Hines adds. “Many of the youth that visit never get the opportunity to visit an airport and we love bridging that gap for them. Several who have passed through the doors return later in life to share with us their aviation career that started right here with a simple visit to Virginia Highlands Airport.

The general aviation airport is also host to a Virginia State Police aviation unit and the Virginia Department of Forestry has a base of operations there during the fire season. Nine business jet aircraft call the Virginia Highlands Airport home, as well.

Washington County, Virginia owns the Airport and the Virginia Highlands Airport Authority is its governing body. There is a total of 10 full-time and part-time employees. “We pay our salaries, all of our utilities, our insurance – all operating expenses without assistance, whether it’s county, state, or federal” Hines reports. “So, we’re completely self-sufficient.”

The annual operating budget is about $1.2M and the Airport, itself, is valued at more than $24 million. It just spent $1 million on tree-clearing to enhance the safety of its approaches for arriving and departing aircraft. More than $16 million has been spent, so far, on a project to expand a 4,471-foot runway to 5,500 feet. Capital funding for the Airport comes primarily from the Federal Aviation Administration Airport Improvement Program. In the Commonwealth of Virginia, these programs are funded with 90 percent Federal Aviation Administration money. The Virginia Department of Aviation covers eight percent, and like many general aviation airports, two percent comes from the Airport’s sponsors, in this instance, that’s the Virginia Highlands Airport Authority and Washington County.

That investment in the Airport is intended to help keep the economy growing in Southwest Virginia. According to a 2018 Economic Impact Study, Virginia Highlands Airport supports 87 jobs with an annual payroll of more than $3.1 million, and an area economic impact of over $7.4 million. The Airport is also part of The National Plan of Integrated Airport Systems, which is submitted to Congress in accordance with Section 47103 of Title 49 of the United States Code. The plan identifies 3,380 public-use airports that are significant to national air transportation and, therefore, eligible to receive grants under the Federal Aviation Administration Airport Improvement Program.

The official designations the Virginia Highlands Airport enjoy today belie its humble beginning. In the late 1950s, the Appalachian Power Company began construction of its Clinch River Power Plant, located about 30 miles north of Abingdon in Carbo, Virginia. An employee of the company building the plant wanted to live in the Abingdon area and fly to the construction site at Carbo. At the time, there were no nearby landing strips in the area, so some farmland was leased from what was known as the St. John farm, located about two miles west of Abingdon, next to U.S. Highway 11. The Airport started there with just a small dirt strip graded out of a pasture. Over the years, other area residents started using the landing strip. In 1964, a group of local pilots pooled resources to lease the land and used it as a runway for their recreational flying. 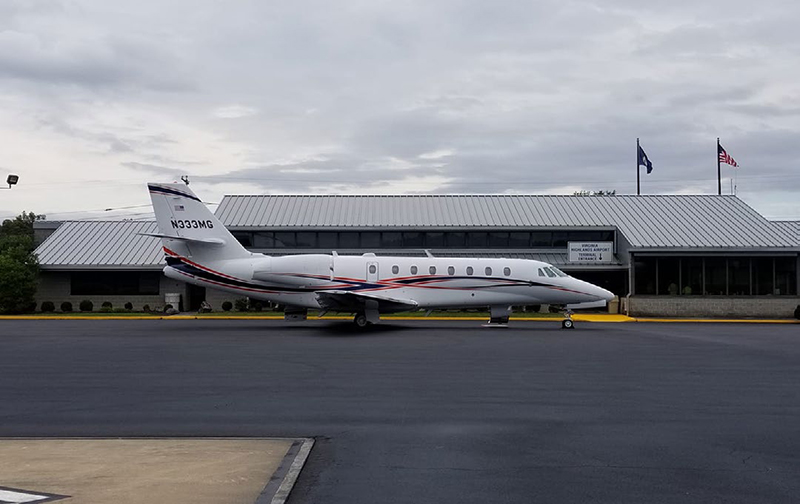 Around the same time, the Interstate Highway System was being developed. Southwest Virginia was becoming more connected to the rest of the country and industry was coming to the region. Washington County leaders felt an airport was needed to capitalize on the new potential for development. The county joined forces with the Town of Abingdon, and with the help of state and federal government, acquired additional property and built a paved runway.

It quickly became apparent that what was then a 2,800-foot long, 40-foot wide runway was not adequate to cover the area’s air transportation needs. Aviation in the United States was developing rapidly, and the Airport’s runway limitations meant it would continue primarily serving recreational pilots.

Things began to change in 1983. That’s when the Airport Commission, local businesspeople, Congressional representatives, and representatives from the Virginia Department of Aviation and the Federal Aviation Administration met. Attendees expressed concern about the condition of the Airport and its importance to economic development for the county and Southwest Virginia.

The first step to ensure the Airport’s future viability was to lengthen the existing runway to 3,380 feet. However, it was still only 40 feet wide. By 1986, the first runway was converted into a taxiway and a new runway was built. It was the same length, but 75 feet wide. This met all the appropriate safety requirements of the day, but the runaway was still too small for many corporate and business aircraft.

In the next three years, security fences were installed, a helipad was constructed, and a rotating beacon was installed. The state of Virginia installed a localizer approach, allowing for safer landings in marginal weather. Also, during this time, plans were coming together for the construction of a new terminal building. In the early 1960s, the only terminal building was an old house trailer reject from the U.S. Department of Housing and Urban Development. A “lean-to” building was constructed near the main corporate hangar, but this soon proved inadequate.

In 1990, the Airport Commission, Washington County, and the Virginia Aviation Board authorized construction of the present terminal building. The building was completed in 1991 and was dedicated along with a new runway extension. That took the runway to its present length of 4,470 feet.

Today, the Airport has 49 T-Hangars, seven corporate hangars, and five clear-span hangars. There are 69 GA aircraft based at the Airport representing everything from ultralights to business jets. There is a Virginia State Police Medflight unit based at the Airport that serves all of Southwest Virginia, providing emergency medical flights and aerial law enforcement. 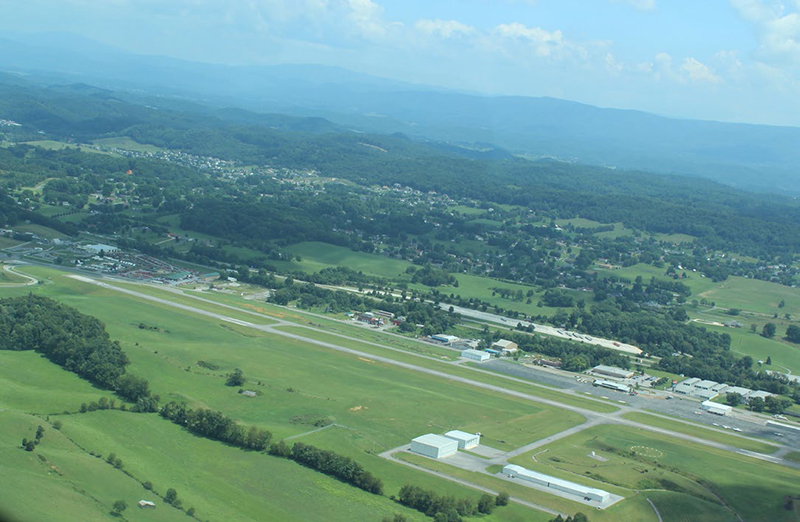 The Airport Authority has purchased additional land, constructed new hangars, security fencing, and started construction on the $20M runway extension because leaders of the Airport and Washington County believe that the community has missed out on new industries that have taken their business to facilities with longer runways. The Airport and Washington County want to provide airfield infrastructure to safely and effectively accommodate the current and projected demand for aviation activity in Washington County, VA and the surrounding area. “That’s unlikely to be a problem when the expansion project is finished. At 5,500 feet, the Virginia Highlands Airport’s new runway will be able to accommodate about 75 percent of the general aviation business aircraft flying today,” Hines says.

Hines also expects new pilots and passengers will appreciate what regular patrons of the Virginia Highlands Airport have known for years. “We think it’s more convenient for corporate aircraft that come into our area, to come into Virginia Highlands,” he explains. “There is less air traffic and crews and their passengers do not have to worry with a lot of long security lines. It’s easy in, easy out. We are the front door to our community, located right beside Interstate I-81, and we have all the amenities for visitors to enjoy, with our beautiful lakes and the surrounding Blue Ridge Mountains that provide numerous recreation and entertainment options for everyone. The only thing we need is the longer runway and we’re working on that.”

WHERE: West of Abington in Washington County, VA

In operation for more than 30 years, Baker’s Construction Services, Inc. is a multi-faceted company that provides a variety of services, which include site preparation, as well as drilling and blasting, and all phases of heavy highway construction.

Baker’s Construction Services, Inc., which is currently handling site preparation for the Virginia Highlands Airport runway in Washington County, Va., is managed by a team of Civil Engineers backed by years of experience in the field. In fact, you are more likely to find them at project sites than behind closed doors in an office.

Driven by a commitment to excellence and a desire to maintain a sterling reputation, our highly skilled team members are the reason customers turn to Baker’s Construction Services for their most complex projects. Some of our projects include Bristol Motor Speedway, Kentucky Speedway, the Greene County Airport, The Pinnacle, the Boone Dam Seepage Mitigation Project, The Meadows Development, and the East Tennessee State University parking garage.

Whether creating a retail parking lot, constructing bridges, developing the infrastructure for a subdivision, or building an entire section of interstate highway, BCS has a dedicated team of equipment and personnel prepared to meet the specific demands of heavy highway and road construction. When it comes to road construction, we literally move mountains to complete a project.

With job superintendents on-site at all times, and skilled supervisors in the field, we complete projects faster and more economically. Our operators are cross-trained, providing the flexibility and efficiency that allows Baker’s to provide nearly any construction service required by the project, saving you time and money. Thanks to a company-wide program for continuous quality improvement, the people of BCS are continually raising the bar for performance and efficiency.

Fully bonded and insured, Baker’s Construction Services, located in Tennessee, is a licensed contractor and is a pre-qualified DOT contractor.

One of the top community banks in the United States. As a financial services firm with locations throughout Virginia and northeast Tennessee, we offer personal and business banking. Lending solutions are managed by mortgage, agricultural and commercial lending divisions. Comprehensive solutions are available through trust and brokerage service representatives.