Dallas Love Field Airport (DAL) – So much to look forward to

So much to look forward to

Dallas Love Field (DAL) is leading the evolution of the airport experience, serving nearly 17 million passengers in 2019 – the most in its history. Located six miles northwest of downtown, Dallas Love Field is a city-owned public airport and was actually the main Dallas airport until 1974, when Dallas/Fort Worth International Airport (DFW) opened.

“Prior to the pandemic Dallas Love Field was the 31st busiest airport in the country,” reports Mark Duebner, Director of Aviation for the City of Dallas. “We handled more than 16,000,000 passengers. All this with a relatively small land size, only 1300 acres with two runways and 20 gates. So, I guess you could say we’re a very busy medium hub airport.” 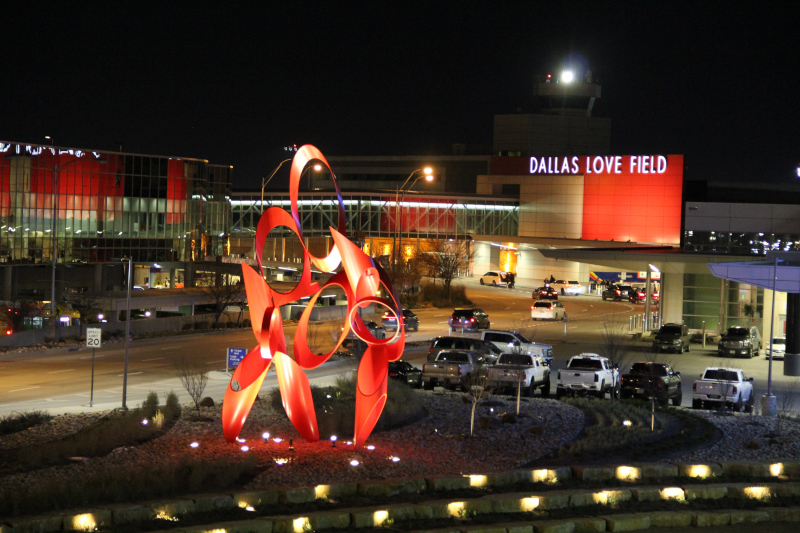 Dallas Love Field was commissioned on October 19, 1917, as a training base for the U.S. Army Air Service during World War I and was named for Army Lieutenant Moss Lee Love, who perished during flight training. After the war, Love Field continued as a military airbase until the City of Dallas purchased it in 1927, clearing the way for civilian use. Its first paved runways were completed in 1932 and commercial air service increased throughout the 1930s. The airport played a significant role for the military again in the early 1490s during World War II, and saw expanded growth as a passenger airport during the post-war boom. By 1965, the airport had new terminals and a second parallel runway.

In 1964, the FAA mandated the cities of Dallas and Fort Worth to collaborate on building a major airport to serve the entire DFW Metroplex. Dallas-Fort Worth International Airport’s opening in 1974 came on the heels of Love Field’s busiest year to date in 1973 and was meant to effectively end passenger service at DAL. After a lengthy legal battle among multiple parties, the Wright Amendment was instituted to restrict the operations of passenger aircraft at Dallas Love Field to locations within Texas and the neighboring states of Arkansas, Louisiana, Oklahoma, and New Mexico. While some restrictions were relaxed, it is still federally mandated to a limit of 20 gates and no international travel.

“We are proud of who we are,” Duebner declares. “Southwest Airlines was the only carrier that did not choose to relocate at that time and has continued to be the main carrier operating from the field. We are an urban airport, and Dallas sort of grew up around us. The demand here is greater than the supply. On top of commercial service, we have some 40 hangars for general aviation. We also have large facilities on our field for maintenance, overhaul, and makeready for Gulfstream, as well as Bombardier. Flexjet, which is a fractional ownership company also operates out of Love Field.”

There are eight Fixed Base Operators at the airport. Each FBO caters to a specific need, and with the diversity and scale of traffic, there is an immense need. “That also means we are a major employer,” says Duebner. “The Department of Aviation has about 340 employees and then the Dallas Police Department provides our airport police and the Dallas Fire-Rescue as well, so there are around 450 city employees in total. Southwest probably has 2500 to 3,000 employees and TSA another 1000 or so. Not to mention all the maintenance and repair – I would say Love Field supports probably 11,000 jobs on airport between us, the airlines, and the general aviation community.”

Of course, COVID-19 has certainly slowed down operations. Dallas Love Field is seeing around 50 percent of their regular traffic, which is still a challenging number with only 20 gates. But it also means concessions are down 50 percent, as well as retail sales and jet fuel. Duebner explains, “We have significant protocols in place to maintain safety, but the real problem comes from the designs of airports themselves. Airports were originally designed without thinking about social distancing protocols. The classic airport design had figured out square footage per person per hour during the peak to have enough room for people to move through gate areas and corridors. Now, you’re trying to get six feet of separation from people. So, you’ve reduced the amount of space you can use in those common areas by about three quarters.” 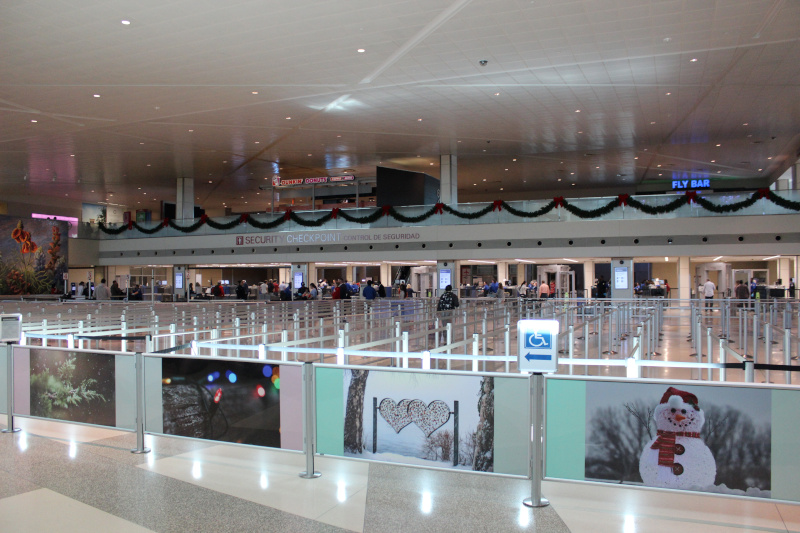 In regard to future planning, there are many new issues to keep in mind with regard to designing and refurbishing an airport. Duebner advises, “It’s not just because of the pandemic but also because of changing needs. We are in a pretty good spot with the renovated terminal, but now we have a parking garage that is at the end of its useful life and we also just have a single roadway in and out. We’re going to continue to work on that, but as we redesign and rebuild that parking garage we need to be thinking about how traffic will develop; about how vertical take-off and landing could change urban air mobility. Is there a need for single-family cars or will ride sharing become the norm? What about designing for autonomous vehicles? When you are looking five to ten years out there is a lot to consider. If we have learned anything from this past year it is the need for flexibility. So the challenge in designing something for the near future comes from thinking about how we can make it flexible to deal with the things that might happen in the future.”

To that end, Dallas Love Field leans heavily on its partnerships with industry on the airfield and with the community. “We love to work with really forward-thinking design firms like Gensler,” says Duebner. “They’ve done a lot of great work and allowed us to evolve with a vision. Then we have Austin Bridge and Road bringing us all the latest and greatest in construction techniques and pavement. HG Multiplex is one of our key concessionaires, who offer the latest and greatest in concession opportunities and amenities to our passengers, including gourmet steak or seafood! We are also very lucky to have Textar Aviation – they are a premier FBO catering to high-quality customers. There are many wealthy individuals and corporations who fly out of here and Textar is maintaining those high levels of service so we can remain competitive. The key to being competitive and helping your business partners succeed is working with them and learning from them. For us, it is a true partnership.”

In 2015 Love Field also launched the Good Neighbor Program. Being an urban airport, now surrounded by residential homes, it wanted to include the people outside the fence in terms of planning. By engaging and supporting the surrounding community DAL has discovered the need for more landscaping, fencing, private commercial development, and other aesthetic changes that would make everyone’s life easier. This includes a planned $17 million streetscape enhancement to be completed at a later date. According to Duebner, “This will be a major makeover of the outdated roadway coming into the terminal. It currently has inadequate lighting, it’s not pedestrian-friendly, and the landscaping is poor, so this project will dress up the front entrance to the airport. We’re adding a new piece of public art – that’s going to be exciting and it will make driving around DAL a pleasant experience. We want to make the airport into something you want to be close to.”

The airport will begin the reconstruction of the primary runway in early 2021. The project will close the primary runway for 9-10 months. During that period, the airport will be down to one runway.  Extensive coordination has taken place between the airport, air carriers, FAA and airport tenants with the assistance of design consultant HNTB. DAL is also in the design phase of a Crossfield Taxiway project, with construction planned to begin in 2022 at an expected cost of $35 million. It will correct the taxiway geometry from the old airport layout. The hope is to increase efficiency and safety for aircraft on the airfield and modernize the system. “A lot is happening in 2021 and 2022 and we are really excited,” Duebner shares. “There is so much to look forward to!”

Since 2015, Dallas Love Field has consistently placed in the top three when it comes to the Airport Service Quality Awards – seen as the gold standard measurement in terms of customer experience. In 2018 and 2019, Love Field earned the top honor for North American Airports that serve 15-25 million passengers per year. And the airport ranked third in 2016 and 2017 after a second-place showing in 2015.

This year Dallas Love Field is proud to have been inducted into the Airports Council International Director General’s Roll of Excellence for its multiple honors through the Airport Service Quality Awards program. It is one of just seven airports to receive this honor. Since its induction in 2011 only 55 airports have received this award.

Congratulations to all involved!

Powering your flight with more than just fuel

Textar Aviation (KDAL) is a prime FBO fixture at the Dallas Love Field Airport, only minutes away from KDFW and KADS, downtown Dallas, Legacy and the Telecom Parkway in Richardson/Plano. Love Field is your gateway to the Dallas/Fort Worth metropolitan area, conveniently located near upscale shopping, luxurious hotels, hundreds of restaurants and many area attractions – all within a 10 mile radius.

Whether your trip is for business or pleasure, our superior FBO services are available to you 24 hours a day, 365 days a year. Our facility boasts over 75,000 square feet of hangar space along with a 12-acre aircraft apron, which means you will always enjoy full accommodations.  To complete the full-service offering, we also provide:

We are proud to be the Avfuel Premier FBO at Dallas Love Field. It is a true partnership with the Airport – working together to succeed. With the ultimate goal to surpass our clients’ expectations.

Hudson, a Dufry Company, is a North American travel experience leader turning the world of travel into a world of opportunity by being the Traveler’s Best Friend in more than 1,000 stores in airports, commuter hubs, landmarks and tourist destinations. Our team members care for travelers as friends at our travel convenience, specialty retail, duty free and food and beverage destinations. At the intersection of travel and retail, we partner with landlords and vendors, and take innovative, commercial approaches to deliver exceptional value.

As a mobility and economic hub to one of the largest metropolitan areas in the country, Dallas Love Field is an industry leader in operations, management and customer satisfaction. As their trusted partner, HNTB is committed to continue delivering projects critical to the airport’s long-term growth and success.